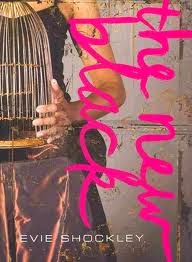 A few months ago, a non-traditional student at my university asked would I be willing to meet with her and her 16-year daughter to discuss poetry and other readings. Sure, I said. So we met, talked, and I let the high school student borrow a few works from my bookshelf.

She chose books by Langston Hughes, Gwendolyn Brooks, and Colson Whitehead. I suggested that she also take Evie Shockley's the new black. When I met with the high school student and her mom a month later, she asked could she keep the new black a little longer because of how much she enjoyed reading and re-reading the poems. Certainly, she could keep it longer.

After the meeting, I emailed Evie and informed her about the encounter with the student. I mentioned the student's name, and a few days later, guess what came in the mail? Yep, the new black, with an autograph, and a note from Evie to the high school student.

At our last meeting with the student and her mother, I asked the student for an exchange: I retrieved my copy of the book and presented her with her own autographed the new black. When she saw that the book had a note from Evie to her, she was in shock for a moment. She then actually hugged the book and whispered to her mom, "I'm keeping this forever."

Really, this 16-year-old assumed I possessed some kind of magical powers. A little while back, I mused about the sci-fi features of Evie's work. Maybe, I should've gone further and wondered about her sorcery or voodoo abilities. I mean, how else do we explain a poet who writes a short note that can transform a teacher into a superhero?

Related:
• A notebook on Evie Shockley
Posted by H. Rambsy at 9:19 AM