Tyehimba Jess and 50 other poets: a guide 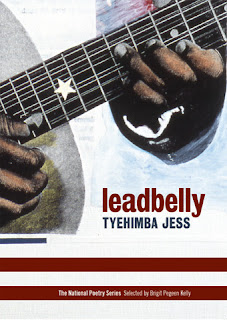 [One of my classes is reading Tyehimba Jess's Leadbelly this semester. What follows are notes that I'll pass along that serve as a kind guide for poems and volumes to consider during our "browsing sessions," where students will have opportunities to peruse dozens and dozens of books of poetry.]

Jess's Leadbelly is based on this real yet almost mythic bad man figure, which is to say that the book deals quite a bit with black folklore. Accordingly, you can check out works like Gary Copeland Lilley's "Let the Devil First Ask One Question," Helen Johnson's "Sonnet to a Negro in Harlem," Etheridge Knight's "I Sing of Shine," Larry Neal's "Poppa Stoppa Speaks From His Grave," and Calvin Forbes's "Talking Blues." Go further back and link the folk qualities of Jess's work to Gwendolyn Brooks, Henry Dumas, Margaret Walker, Paul Laurence Dunbar, and Fenton Johnson.

Jess's Leadbelly, includes a crown of sonnets near the end, so you can link his work to other similar works like Natasha Trethewey's "Native Guard," Marilyn Nelson's A Wreath for Emmett Till, and the sonnet sequences from books by A. Van Jordan, Allison Joseph, Nikky Finney, and John Murillo. And while you're at it, might as well check out sonnets by Robert Hayden and Claude McKay. Finally, listen to Jess read, and you'll recognize that he's a skilled performer of verse as well, thus linking him to poets like Tracie Morris, Saul Williams, Treasure Redmond, jessica Care moore,

Hopefully, that can get us started.
Posted by H. Rambsy at 8:49 AM