Things we need to know prior to reading poetry by Cornelius Eady, Tyehimba Jess, and Adrian Matejka 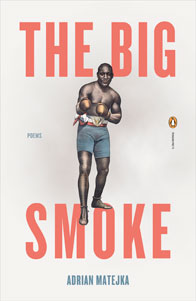 Soon, one of my classes will start a series of discussions and activities related to Cornelius Eady's Brutal Imagination, Tyehimba Jess's Leadbelly, and Adrian Matejka's The Big Smoke (2003). The volumes showcase bad men--Eady writes in the voice of the (fictitious) black man who Susan Smith claimed kidnapped her children; Jess writes about a tough ex-con turned legendary folk singer; and Matejka writes about the first heavyweight boxing champion Jack Johnson.

Before we read those volumes, we'll need to know a few things about poetry and bad men.

1. For one, there are long histories of tales about bad men--bad black men--in folk culture. Back in the day, enslaved African Americans told stories about that bad rabbit and even badder High John the Conqueror. Later, stories about Stagolee and then Shine began circulating.

2. There are histories of bad men in poetry (a timeline).  On the one hand, we have poets writing about audacious men like Helen Johnson's "Sonnet to a Negro in Harlem;" on the other hand, we have poets like Claude McKay in "If We Must Die," Dudley Randall  "Frederick Douglass and the Slave Breaker," and many others presenting or adapting attitudes of defiance.

3. Tales about bad men are also vehicles for storytellers to share social critiques, jokes, worries and fears, cultural pride and values, narratives of the past, blueprints for future actions, black folks' veiled and not so veiled frustrations with white injustice or anti-black racism, inter- and intra- racial and gender conflict, and simply entertaining stories The tales are also vehicles for displaying verbal skills.

4. Eady's, Jess's, and Matejka's approaches are part of widespread practices among poets of using persona poems to represent the perspectives of their subjects.

Related:
A Notebook on bad men in poetry
Posted by H. Rambsy at 8:48 AM