The Speculative qualities of poems about slavery 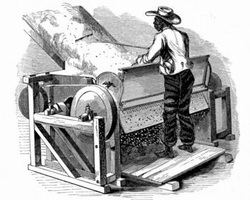 We usually view contemporary poetry about slavery as poems about history. That's understandable and probably right. But what if there's more?

When modern-day poets look back and especially when they write in the first-person of enslaved people, then aren't those writers participating in a kind of sci-fi or at least speculative enterprise? Elizabeth Alexander, Lucille Clifton, Thylias Moss, Frank X. Walker, Kevin Young, and several others are jumping into figurative time machines when they take on the voices of people who lives over a 150 years ago. It's really SF when you think about it.

My studies related to afrofuturism (AF) -- a critical approach for thinking about the intersections between technology, speculative narratives, and race -- are what led me to consider the Sf implications of poems about slavery. From an AF perspective, we might view persona poems about a historical moment as a process of updating or rewiring views of the past.

Robert Hayden's "Runagate Rungate" is a wonderful speculative fiction based on historical evidence, and more, the poem is technically fascinating with its collage of voices and moving parts and that ghost train, "movering, movering" along the underground. When we view the poem in the realms of historical and sci-fi and technical, we have a better appreciation for the multiplicity of Hayden's work.

The same goes for Opal Palmer Adisa's poem "Peeling off the Skin," where she writes in the voice of Nat Turner as a ghost, a purse, and a lamp shade.  When Turner was killed after his insurrection, his body was said to have been skinned and cut up into pieces. In Adisa's poem, she imagines those pieces transformed into objects yet still speaking with Turner's defiance.


Adisa's poem is historical, yes, but the poem is also yet another example of the many ways that poets engage in the art and practice of speculation.