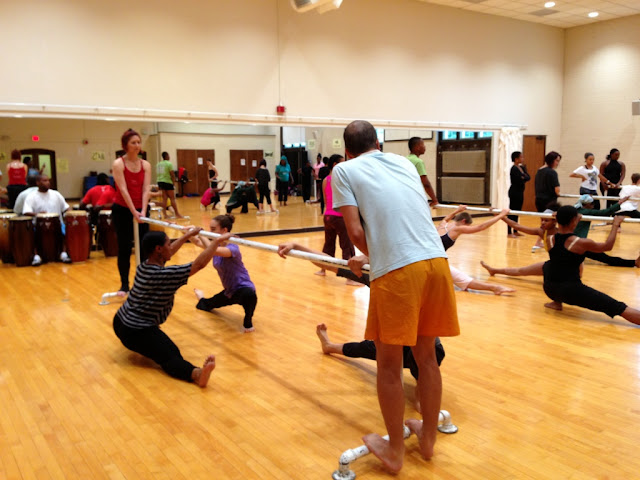 July 27 - August 4, 2013, marked the 30th Annual International Katherine Dunham Technique Seminar, which was held at Washington University in St. Louis. The annual seminar is devoted to the perpetuation of Miss Dunham’s legacy through her dance technique, choreography, and her holistic approach to building community through intercultural communication and performance arts education. Each year, seminar participants from around the world gather in St. Louis to receive authentic Dunham Technique dance training and to attend lectures devoted to the life and work of Miss Dunham.

This year was particularly special for me because I conducted two of the lectures and film series. As a first-time lecturer with a non-dance background, I wanted to incorporate more primary source materials into the film/lecture giving it a multimodal feel by fusing together elements such as my collection of Miss Dunham’s musical recordings, her writings, and drums to highlight the material and spiritual elements of Dunham Technique. For many seminar participants, they had the chance to hear Miss Dunham sing in Haitian Creole and Portuguese for the first time.

Additionally, this year’s seminar participants were able to view never-before-seen footage of Miss Dunham discussing Dunham Technique in her own words as she envisioned it. One of the most important aspects of Dunham Technique is the balance of body, mind, and spirit. For Dunham, this was evidenced not just in dance technique and instruction, but in one’s understanding of self and chakras or energy centers of the body.

Although there was no gala this year, seminar participants decided to have a BBQ at the museum and help retrieve artifacts from Miss Dunham’s home for storage and safe-keeping in the museum. There was positive energy throughout the seminar and according to Ms. Ruby Streate, Master Teacher and Director of the Children’s Workshop in East St. Louis, this year’s seminar was “the best seminar since Miss Dunham’s transitioning.”

This is only my second seminar. My first attendance was in 2011 when I was just beginning my thesis work on Katherine Dunham. In that time, I have become immersed, not only in the scholarship, but in the choreography, the Katherine Dunham Museum and Children’s Workshop, and the people. I can honestly attest to the growth that I see in myself from then to now and in the process I’ve gained an extended family of Dunham legacy keepers.

Danielle Hall is a contributing writer for the Cultural Front.
Posted by H. Rambsy at 8:12 PM