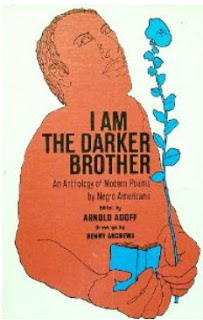 My parents aren't that into black poetry; nonetheless, when I was growing up, they did have this book--I Am the Darker Brother: An Anthology of Modern Poems by Negro Americans (1968) edited by Arnold Adoff--around the house. That collection was the first anthology of poetry that I ever recall reading. I was reading, or rather looking at the drawings in the book, at a fairly young age before I was fully grasping the words in the poems.

The title of Adoff's anthology is from Langston Hughes's poem "I, Too."  Back in the day when I was looking through I Am the Darker Brother, I had no idea that it was linked to this larger enterprise known as the Black Arts Movement. All I knew was this single book had poems by multiple authors and some drawings. Those drawings, I would learn later, were by artist Benny Andrews.

Now usually when folks into black poetry talk about anthologies that were released in 1968, they mention Amiri Baraka and Larry Neal's Black Fire. That explosive work represented a defining moment in the production of black verse. But, in retrospect, my earliest introduction to the black arts were my childhood perusals of I Am the Darker Brother. Works like For Malcolm, Black Fire, Understanding the New Black Poetry, and many others came much later.

When I was in graduate school and researching the Black Arts Movement, I discovered Adoff's City in All Directions; an Anthology of Modern Poems (1969); Black Out Loud: An Anthology of Modern Poems by Americans (1970); The Poetry of Black America: An Anthology of the 20th Century (1973). That last one was far more extensive than Adoff's first anthology, but I'm still thankful that I encountered I Am the Darker Brother before all the others, as I probably needed to take things in in small doses early on.

Not long ago I was looking for materials in my collections and came along Adoff's collection. All these years later, and I'm still returning to that small yet important collection.
Posted by H. Rambsy at 7:28 PM