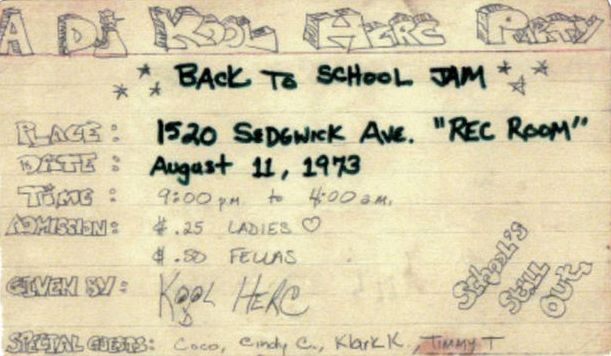 What initially started as a few tweets and instagram posts celebrating Hip Hop’s 40th birthday turned into extended conversations on hip hop’s origins and the significance of today. I would be remiss if I didn’t say a little something here, after all “you love to hear the story how it all, how it all got started.”

On August 11, 1973, DJ Kool Herc threw a “back to school jam” for his sister’s birthday in the recreation room of Morris Heights Apartments on 1520 Sedgwick Ave. in Bronx, NY. It was at this event that Kool Herc experimented with moving the crowd. Noticing how the crowd would react and dance only at certain parts or breaks in a song, he incorporated a “break beat” technique on his turntable that allowed the crowd to dance longer during those breaks, but it also gave the DJ and Emcee (M.C.) a platform to interact with and move the crowd by speaking or “rapping,” and performing over a beat.

So if we want to talk about origins in Hip Hop aesthetics-wise, we can trace it all the way back to West African folk traditions, more specifically the griot. We can trace it back to Zora Neale Hurston’s Characteristics of Negro Expression (1934). We can take Katherine Dunham’s studies of the form and function of dance and ritual life, and her incorporation of drums into performances, which demonstrated the interplay between dance, sound and rhythm—in her words “learning which areas of the body certain rhythms affect.” We can see breakdancing movements in the Brazilian capoeira or the ag’ya in Martinique.

However, the most important relationship that set in motion the grammatical, stylistic, rhythmic and cultural aesthetics of hip hop that we see today can be located in the works by poets of the Black Arts Movement of the 1960s and 70s. These “jazz poets” and writers (Amiri Baraka, Gil Scott-Heron, The Last Poets, Sonia Sanchez, and Jayne Cortez to name a few) were influenced not only by politics and racial turmoil of the period, but on the cultural front these poets embodied Black Pride and Power Movements.

The event that took place this day in 1973 is what ultimately shifted the art form, making it a distinct and modern youth and urban culture by fusing in what is known today as the elements of hip hop (the DJ, Emcee, breakdancing or b-boys/b-girls, and graffiti). Still, it’s important to see and understand the intergenerational links between Hip Hop’s past and present and we look to the next 40.

Danielle Hall is a contributing writer for the Cultural Front.
Posted by H. Rambsy at 4:33 PM

I found this interview in some archives...Dr. Chris Harris is a heavy hitter...please excuse the rough unedited cut...I think you find the value and contribution to our conversation http://www.youtube.com/watch?v=HIpDnkIsOQY&feature=c4-overview&list=UU9xnwt5AgL9dm-jL5EZrPCg