From Corinthan Hall to RapGenius: The Evolutions of Frederick Douglass's July 4th Speech 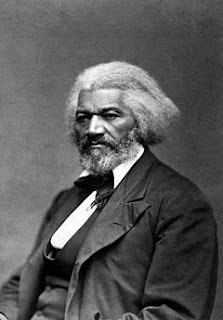 A few days ago, folks in my circles emailed the annual reminders to check out that famous Douglass speech amid 4th of July celebrations. Among those reminders, I received one from Jerry W. Ward, Jr. who noted the resonance of Douglass's speech, which is "often referred to as 'What to the Slave Is the Fourth of July?'" Professor Ward is always attentive to language, so his line "often referred to" caught my interest.

A day or so later, I realized that the folks at RapGenius had recently uploaded Frederick Douglass's speech, which had been delivered on July 5, 1852, in Rochester, New York.  As I prepared to annotate some of the sentences from the piece, I became distracted thinking about the distances Douglass's speech may have traveled before arriving on RapGenius.

The speech was initially published as a pamphlet Oration, Delivered in Corinthan Hall, Rochester, by Frederick Douglass, July 5th, 1852. Later, the speech was entitled  "The Meaning of July the Fourth for the Negro." In 1950, Douglass's speech appeared in Phil S. Foner's The Life and Writings of Frederick Douglass, Vol. 2, Pre-Civil War, 1850-1860, and in 1975, Folkways Records  released The Meaning of July 4th for the Negro with actor Ossie Davis performing Douglass's speech.

Douglass's speech is presented on RapGenius as part of the Common Core State Standards Initiative, which "provide a consistent, clear understanding of what students are expected to learn, so teachers and parents know what they need to do to help them." Thus, Douglass's work appears alongside other canonical texts, including The Declaration of Independence, Abraham Lincoln's "The Gettysburg Address," Emily Dickinson's "We Grow Accustomed to the Dark," Walt Whitman's "Song of Myself," and Robert Frost's "The Road Not Taken."

When  Douglass gave his speech 161 years ago, he informed his audience that "the distance between this platform and the slave plantation, from which I escaped, is considerable." Indeed. And so is the distance from Corinthan Hall to title changes to a Folkways performance by Ossie Davis to the Common Core to the subject of annotations on RapGenius.
Posted by H. Rambsy at 1:43 PM