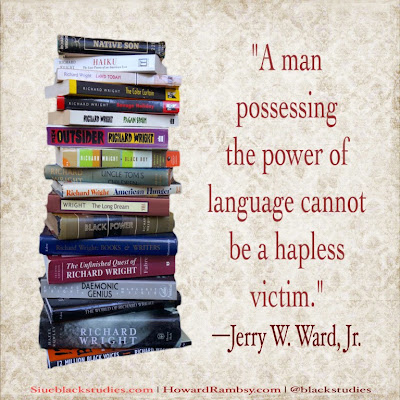 One of the Harvard reports on the humanities recommends that professors become more actively engaged in the academic and intellectual lives of students, specifically at some point during the first 3 terms or semesters. Often, accomplished professors teach graduate courses and advanced undergraduate classes, so first- and second-year students are less likely to encounter these professors in classroom contexts. The Harvard report suggests that the absence of attention to lower-level or introductory courses could be a reason that would-be humanities majors leave for other fields and disciplines.

Those observations from the report prompted me to consider my own early experiences as an undergrad at Tougaloo College. I took one of my most memorable courses during the first semester of my sophomore year in 1996 with Jerry W. Ward, Jr. The course focused on works by Richard Wright. At Ward's suggestion, I re-read Wright's Native Son, Black Boy, and stories in Uncle Tom’s Children during the summer prior to taking the class.

During the semester, we covered Wright's less popular works, including Lawd Today!, Black Power, The Color Curtain, Pagan Spain, Savage Holiday, Eight Men, and The Outsider. Ward shared copies of the Richard Wright Newsletter with the class, and I checked out Wright's 12 Million Black Voices that semester outside of class. Covering so much material by a single major writer under the guidance of a leading scholar on the subject so early in my academic career was really important and unusual.

In retrospect, I benefited by reading a major writer who composed novels, short stories, travel writing, a type of political journalism, and a visual cultural history in the case of 12 Million Black Voices in a single semester during the first semester of my sophomore year. So much of the multi-genre work that I have done over the years is linked to what I began learning about Wright all those years ago.

Related:
• Coverage of the Humanities conversation
• A Notebook on Richard Wright
Posted by H. Rambsy at 12:37 PM