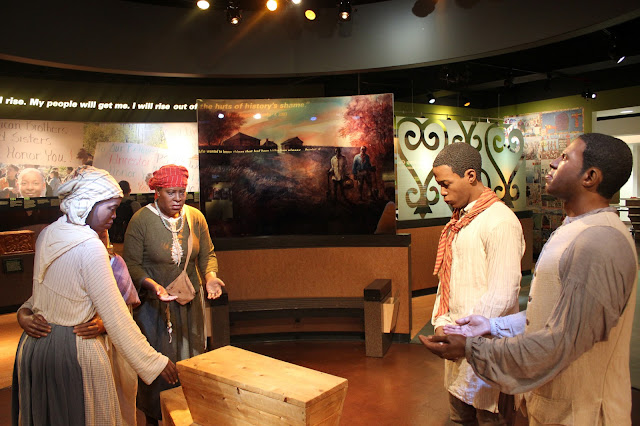 From the African Burial Ground site:


From about the 1690s until 1794, both free and enslaved Africans were buried in a 6.6-acre burial ground in Lower Manhattan, outside the boundaries of the settlement of New Amsterdam, later known as New York. Lost to history due to landfill and development, the grounds were rediscovered in 1991 as a consequence of the planned construction of a Federal office building.

In their post-trip responses, almost all of our 15 travelers wrote about the African Burial Ground and how they considered their visit to the site as one of the most notable and worthwhile experiences on our trip to New York City.

As Jazmine, one of our travelers, noted "The African Burial grounds were the most interesting to me because I am very emotional when it comes to slavery and racism and I felt a connection with the people who suffered because they are my ancestors."

Olivia, another traveler, wrote that "standing on the African Burial Grounds was quite an experience. The museum forced me to recognize my relation to those who, for the most part, built the foundations of a city we enjoy today. To see their bones was the realest connection I have ever had with Africans or slavery. In that moment, I certainly gained a new appreciation for my ancestors."

Over the years, I have had experiences at museums where I had to urge students to take their time studying or appreciating the historical significance of material at a given space. That was not the case at the African Burial Ground. The students took an extended amount of time studying the materials quietly, moving from exhibit to exhibit, and then discussing what they were covering with each other.