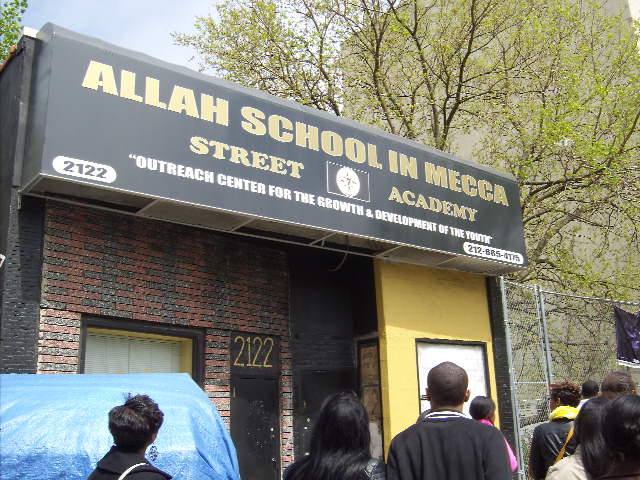 Here's one other notable discovery I found during my recent NYC visit while walking along Adam Clayton Powell Jr. Blvd. en route to the Schomburg Center. We happened to walk past the Allah School in Mecca, a building with a huge 7 atop a crescent moon within a pointed star painted onto the side of the building.

To an average passersby, one would assume that it was just a regular building or outreach center by the Nation of Islam, but it is in fact the Harlem headquarters for the Nation of Gods and Earths (NGE) also known as the Five Percent Nation, founded in 1964 by Clarence 13X a former student of Malcolm X who broke ties with the Nation of Islam. The headquarters in Harlem is known as “Mecca;” Brooklyn is referred to as “Medina;” Queens is “the Desert;” and St. Louis is referred to as “Saudi”—all stemming from locations across Arab diaspora.

For me, this was a n important random discovery. The 1980s into the 1990s or the hip hop’s golden age marked an era of consciousness. Many rappers were members of or affiliated with the Five Percent Nation and incorporated their beliefs and teachings into their lyrics. Some of the notable artists affiliated with NGE included Rakim, Big Daddy Kane, Wu Tang Clan, Poor Righteous Teachers, Brand Nubian, Queen Latifah, Digable Planets, Nas, Mos Def, Erykah Badu, and Jay Electronica, who is a member of the organization.

Who can forget Method Man’s classic lines in Belly when he picks up the phone and says “Knowledge Born, what’s the science?” Occasionally, you may hear Nas say “Peace God” like during the 2013 Grammy’s when he and Kelly Rowland presented the Urban Contemporary Award. On Monday, Nas sent out two tweets “Peace 2 the God’s!” and “Peace 2 the Earth’s.”

Still, one of the more well-known examples is probably Erykah Badu’s “On & On” when she sings “I was born underwater with 3 dollars and 6 dimes, yeah you may laugh cause you did not do your math.” The $ 3.60 refers to 360º meaning wholeness and balance, important concepts in 5-percenter discourse.

The examples I mention above are only a brief example of hip hop’s ghost curricula, meaning unofficial and sometimes informal systems of knowledge and salutations (and I’m not talking about the Illuminati here) that were and are still used as methods of teaching self-empowerment and awareness through music, cultural interaction, and as a tool of reasoning in everyday life.

***
Danielle Hall is a program coordinator and contributing writer for Black Studies @ SIUE.
Posted by H. Rambsy at 11:35 AM

This is a good read.