Arts and the City 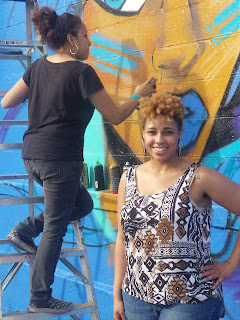 Prior to traveling to New York for our annual Black Studies trip, I was given the task of covering cultural and street arts in the city. I reached out to one of my friends who moved to NYC about a year ago, and he recommended 5Pointz Aerosol Art Center, known to many aerosol artists, native New Yorkers and visitors as the “graffiti mecca.”

5Pointz is located in Long Island City, Queens, and is an outdoor graffiti exhibit that is visible from the 7 train. You can’t miss it because there’s a huge mural of Biggie. It then occurred to me that I had passed by this place last year, but I didn’t know what it was. You come to New York and expect to see a lot of graffiti, but 5Pointz really demonstrates a global community and artist collective. The name 5Pointz represents NYC’s five boroughs, and tourists and artists travel from all over to come here—walking along you’ll notice works by Japanese artist Shiro, German artist Semor and Swiss artists Onur, KKade, and Wes21.

When fellow traveler Cindy and I arrived to 5Pointz, we were greeted by owner and curator, Jonathan “Meres” Cohen and assistant/graffiti artist Lemos, who gave us a history of 5Pointz, as we signed a petition to the NYC Landmarks Preservation Commission to help keep 5Pointz open. The building itself is an abandoned industrial complex. Although Meres stated that he does not own the building, he expressed his vision of transforming the interior of the building into a graffiti museum and arts school for aspiring aerosol artists and performers with a formal curriculum.

One of the highlights of my visit was the chance to meet Maria “TooFly” Castillo an Ecuadorian graffiti artist and graphic designer. She moved to Corona, Queens, as a child and has been doing graffiti art for 15 years. During my visit she was working on her “Indigenous Woman” mural, which has since been completed. In my follow-up readings, TooFly has also co-founded a female urban arts collective called Younity, which focuses on visual art exhibits and developing arts programs for young women.

I’ve watched films like Wild Style and Beat Street, but this was the first time I really became immersed in the graffiti culture—one of the 5 elements of hip hop. As we walked around the building I learned about different aerosol artists, like Carlos “See TF” Game who only does murals of women, and the artist of the Biggie mural did it entirely free-hand.

I also learned how intricate graffiti writing is, like the overlapping technique in wildstyle, and how to distinguish between a tag, throw-up, or a piece. Graffiti artists are the gurus of artistic masking. Lemos described it as “how fresh you can make it while still being true to your name and the form without getting caught.” The art form itself is not illegal, but it has a history rooted in vandalism of public property and subway trains. Yet, in even more “acceptable” settings, there’s remains a level of concealment because originality is a key aspect of the art and well, nobody likes a biter.

5Pointz has been around for 11 years and provides free events from concerts to open mics every weekend. This year, 5Pointz plans to celebrate Hip Hop’s 40th anniversary with a concert. It was also commissioned as a filming site for the upcoming movie, Now You See Me, which hits theaters on May 31, 2013. 5Pointz is a vibrant space; it echoes its unique historical and cultural quality where as long as it’s still standing it will attract more artists and visitors in years to come. In the words of Alice Walker, “anything we love can be saved.”

***
Danielle Hall is a program coordinator and contributing writer for Black Studies @ SIUE.
Posted by H. Rambsy at 7:43 AM