A Journey to Queensbridge, Pt. 2 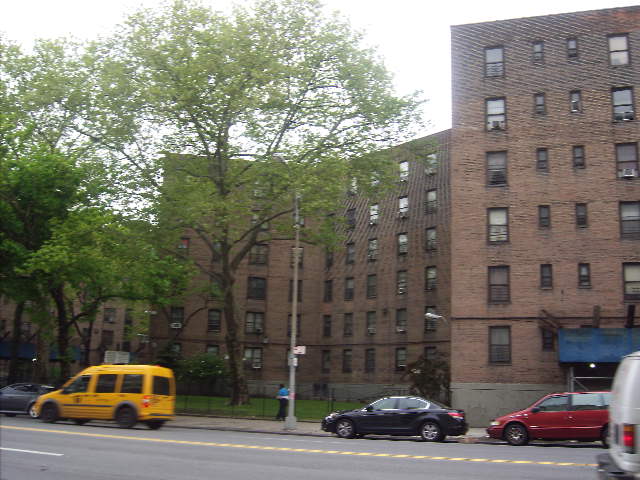 Growing up, you never really question why people live in a particular area or why some neighborhoods are labeled as bad or why students in the city are still being bused to schools 30 or more minutes away. Standing in front of Queensbridge Housing Projects, I was reminded that in St. Louis, all but one of the high rise structures have been torn down and re-developed into more open and modern townhomes, garden style apartments or businesses.

As I mentioned in my previous post, Queensbridge is the largest housing development in New York as well as the United States. It is made up of two separate complexes, North and South—each housing as many as 3,450 residents. After the 1950s, its population became mostly African American or Latino. Like many metropolises, Long Island City, Queens is currently undergoing gentrification, but New York is not St. Louis or Chicago even. If you tear down Queensbridge, how do you effectively re-distribute some 7,000+ residents without enacting the same policies to people who are already disenfranchised?

The larger issue is that amid the myths and realities of urban living, Queensbridge and other housing projects like it that still exist are the visible remains of 20th century de facto segregation. Ta-Nehisi Coates covers this issue in his blog post, "The Ghetto Is Public Policy," as it relates to New Deal Era policies, wealth gaps, and housing in American cities.

Housing projects have always been castigated as a place that you don’t go to because bad people live there and bad things happen there. In a 1997 interview, writer and film producer Julie Dash, a former Queensbridge resident, described it as a “supportive place but one where dreams were often put aside because people could not imagine how to make them real.” It’s hard to envision success when public policies were never created to help you succeed in the first place.

Ta-Nehisi Coates was right on this one, “We are living with the effects of that policy today. And we likely will be for many years.” For too long, our sights have been set on tackling the effect of the problem and not the root of it—what is happening in cities like Chicago and similar communities across the country is directly related to the policies that have bred poverty among black and Latino residents in major urban centers.