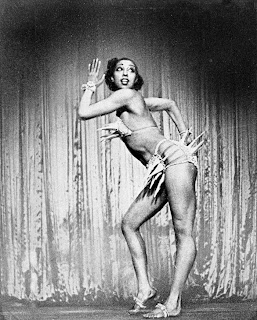 In her book Babylon Girls, author and scholar Jayna Brown describes the complex world of early black women performers. She describes the chorus girls and burlesquers of the period as well as other notable women whom she argues became “figures of self-gratification, not self-abjection and denial.” In the following quote, Brown discusses the advantages that underground environments provided for black women of the working class:


Black popular music and social dance were part of the world of alternative economies…They offered a conditional release from the official forms of exploitative labor in the post-slavery era, paying much more than jobs available under the racist caste system in the United States. For women stage performance was an alternative to the bedroom work of sexual labor…and poorly paid scullery and laundry work in middle-class households. It offered black working-class women mobility and independence. They could earn a good living expressing themselves creatively, working alongside friends and lovers.

Ethel Waters and Lena Horne – Cabin in the Sky (1943); at 2:40, Petunia tells Georgia Brown “ain’t it about time you got into that cootch dance.”

From following women are in the 1949 film Burlesque in Harlem: