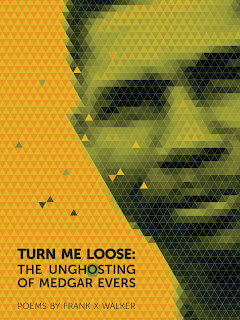 For some time now, I've been thinking and sometimes writing about bad men in poetry and rap music. Almost always, I had bad men in mind who were essentially the descendants of John the Conqueror, Stagolee, and Shine. In other words, I was focusing on bold and unruly, mythic and legendary black men. But what about "bad" white men?

Frank X. Walker's Turn  Me Loose: The Unghosting of Medgar Evers (2013) provides one of the most extensive treatments in contemporary poetry of a bad and in fact villainous white man. In his book, Walker takes on the persona ofwhite Citizens' Council member Byron De La Beckwith, who killed Evers on June 12, 1963. Walker takes on other figures in his volume including Evers's widow Myrlie Evers. Nonetheless, the in-depth engagement with the possible inner workings of De La Beckwith's mind, motivations, and interests, troubling as they were, really forms the core and driving force of Walker's volume.

Persona poems by and about African Americans, I've maintained, represent one of the most important trends in black poetry over the last 10 years at the very least.  For the most part, volumes of poetry by African American poets containing several persona poems tend to focus on prominent black historical figures. We have poems in the voice of Leadbelly, Civil War soldiers, Jack Johnson, Harriet Tubman, Frederick Douglass, and several others. Even Walker took up black historical figures in previous works, writing about York, the enslaved black man who traveled with the Lewis and Clark Expedition, and Isaac Burns Murphy, an accomplished jockey.

Turn Me Loose breaks new ground in the sense that Walker writes several poems from the perspective of a notorious white man who assassinated a notable African American civil rights leader. Other poets have written from the perspective white people here and there, but usually, the focus is on black characters and their experiences with black and white people. Rarely have poets taken on

Patricia Smith's "Skinhead," arguably her most popular poem, takes on the voice of a white supremacist. Walker extends that practice by offering provides a more extensive treatment, and he focuses on a specific, well-known figure in De La Beckwith.  Bad (black) men have proven to be key muses for African Americans poets and rappers. Frank X. Walker reminds us about other, perhaps more horrifying bad men.

Related:
A Notebook on Frank X. Walker
Toward a Contemporary History of Black Persona Poems
Poets, Personas & Runaways
Persona Poems: A Major Trend in Black Poetry
Posted by H. Rambsy at 8:13 AM