Another Wednesday at Heroic Adventures 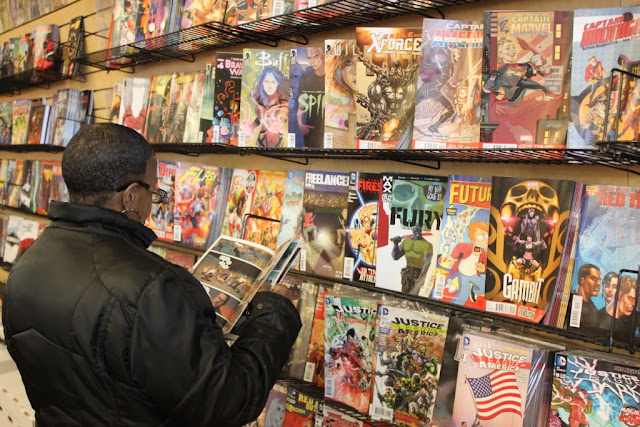 We had a good time looking over the materials. Groups of students wrote responses about their experiences at the comic book store. I've decided to share observations provided by three different groups who were drawn to comic books featuring women characters.

I chose I Love Trouble because the main character, Felicia Castro, has the super ability to teleport, yet she still remains to be a regular person. I also really liked the way the artist shows scenes of multiple action i.e. when she is exercising, fighting, or dancing. Felicia is a really interesting example of a creative African-American lead character that is realistic and 'super.' A.F.

We browsed around, and most of the comic books we encountered were about superheroes, power, or a fight/war. We then stumbled upon a magazine of a glamorous girl/mermaid and it caught our eye. The title of It Girl, and we related it to our key word "toast." Her mannerism shows that she thinks she is an "it girl" and very confident in herself, and she seems to be the one everyone wants to be around. A.B.

To be perfectly honest, neither of us were familiar with any comic book since Archie (circa...1970?). Being novices at this, we had two criteria: something not too frightening, and something that has a person who is African American featured in the book. Yet, Mara caught our eye. We were first interested because it features a woman whose ethnicity was ambiguous. She may or may not be African American. We found this pleasing and intriguing. We were also interested in this comic book because Mara appears to be a strong, independent woman - who also happens to have super powers. J.C.

Related:
• A Notebook on comic books
Posted by H. Rambsy at 8:18 AM