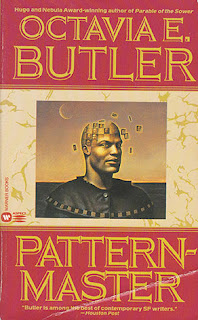 The last book in the sequential order of The Patternist series, but the first book written, Patternmaster is a remarkable story that ties together the stories of Anyanwu, Mary, and Eli. Butler’s second male protagonist Teray—an inexperienced telepath—defeats his more powerful and experienced brother Coransee to become the heir of the mental pattern once their father has died. Although Patternmaster is Teray’s story, the most admirable character is Amber—an independent healer who refuses to become the property of anyone, even if it means death.

Amber is an essential ally to Teray in his quest of defeating his brother’s enslavement. She can heal faster than any other healer, has the experience that Teray lacks, and teaches him how to kill hundreds of ClayArk’s in one mental sweep—which was the skill that he used to defeat his brother. Her desire to remain an independent woman ultimately drives her urge to help Teray stay alive.

As a child, before she reached transition, she killed an experienced Patternist by accident and was exiled from the group's protection. She travelled along the ClayArk’s path alone, and with much success—unlike other patternists. Her expertise in reading people also deemed her a valuable person. One scene in particular displays Amber's determination to remain a liberated woman.

In an attempt to take total control of her body Coransee labels her as his property. In reassurance to him that she would not submit -- just after “she had taken a bullet through the throat” -- she threatens him indirectly. Offended, Coransee slaps her and she remarks, “hit me again and you won’t have an undamaged organ left in your body!” Her cold remark lets Coransee know just how serious she was, and just how much he had underestimated her. From that moment, she became a threat to one brother and an ally to another. No other character besides Amber had the ability to pose such a threat to the powerful Coransee.

Amber’s candid attitude, healing capabilities, and expertise in mental telepathy places her alongside the other extraordinary women in Butler's Patternist series.

********
Briana Whiteside is a graduate student in English at SIUE and a contributing writer for the Black Studies Program.
Posted by H. Rambsy at 11:39 AM