How Kobe can shine as a culture hero despite the stats 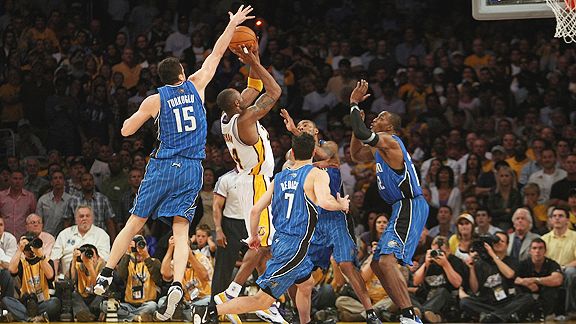 “There is no measure, other than YouTube highlights and folklore, by which he's the best scorer in crunch time,” noted Henry Abbott, a well-respected NBA blogger for ESPN, in a controversial assertion about the mythology of Kobe Bryant in the clutch. Anyone can make a wild claim, so how exactly did Abbott reach his opinion?

Statistics, the new guiding measure of NBA analysis forms the foundation of Abbott’s work, specifically the last 5 years of Kobe’s career. As evidence, Abbott denotes Kobe’s ailing field goal percentage (slightly under thirty percent in the final twenty-four seconds) and the commonality of horrid shot selection (Kobe has nearly as many airballs as makes over his playoff career in crunch time). Perhaps most intriguing is the defensive acumen Bryant allows his opponents by taking 56 “clutch” shots over the last five years to a single assist, a statistic that allows defenses to double, triple, even quadruple-team Bryant in close games (as seen in the image above, a play that resulted in a blocked “clutch” jumper and a Laker loss).

As noted last week, all culture heroes have some degree of mythology and fiction to their individual legends, to which Kobe is no different. Just as Shine was not actually on the Titanic, Kobe’s mystique and aura are increased over time by the masses, often in spite of truth. You can give us all the statistics you want, all the logical arguments necessary to demythologize the 6’6” wingman and scoring legend, but until the YouTube clips and the barbershop talk are eliminated, Kobe will always be clutch.