From Rita Dove to Kevin Young to Lucille Clifton 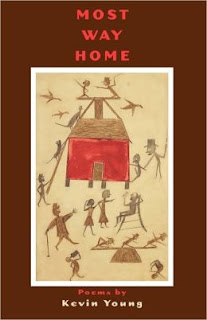 In 1987, Rita Dove was awarded the Pulitzer Prize for Poetry for her volume Thomas and Beulah (1986). The prize gave the volume wide acclaim and became the basis for greatly increasing Dove's cultural capital. Among other new literary admirers, Dove's win and and prominence brought her to the attention of an aspiring young poet living in Topeka, Kansas.

Months before enrolling in his first year at Harvard University, Kevin Young discovered the Pulitzer Prize winning poet. "I fell in love with Rita Dove [during the summer of 1988]," Young informed a student-journalist for the Harvard Crimson in 1992.

Thomas and Beulah provided Young with a model and inspiration on what was possible for a volume of poetry.  "I realized," he told the reporter referring to what he learned from Dove's volume, "I could write about my family, that it was a valid thing to write about."

By the time he was a senior at Harvard, Young had produced a collection of poems, entitled "Most Way Home" as his senior thesis. The poems were based  on stories that he had heard from his father and mother and on the stories and experiences of his extended family living in the South. Young submitted his manuscript of poems for the National Poetry Series competition, and the work was selected as a winner in 1993 by Lucille Clifton, another poet with an inclination to write about family.

On the one hand, Dove and her book's achievement, partly and strongly, convinced Young that his family was a viable subject, and Clifton, on the other hand, provided the vital selection and nod of approval that would ensure that Most Way Home (1995) came into print.