Toward a future history of contemporary African American Poetry, 2000 - 2012 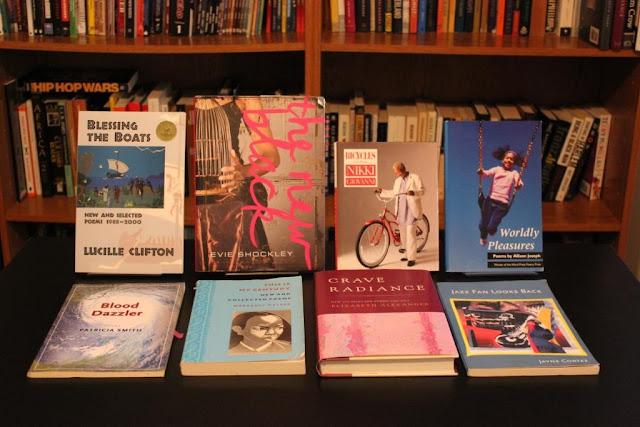 At some point in the future, we'll certainly have to acknowledge the historic gains made by African American poets during the first dozen years of the 21st century. Collectively, poets produced an impressive body of work, earned several prestigious awards and fellowships, secured employment at major universities, and participated in important gatherings, and contributed to the expansion of the art-form.

A list of 105 volumes of poetry published between 2000 - 2012 offers one view of the range of works produced by many different poets. Several of those poets, including Lucille Clifton, Tracy K. Smith, Tyehimba Jess, Terrance Hayes, Yusef Komunyakaa, and Nikky Finney, were recipients of major awards. Clifton, Sonia Sanchez, Michael S. Harper, and Marilyn Nelson received the Robert Frost Medal, Smith and Natasha Trethewey earned the Pulitzer Prize for Poetry.

Not nearly enough has been documented, but African American poets have been important contributors to the practice and development of spoken word poetry over the last 12 years. In towns and cities across the country, spoken word poets have organized vibrant performances, nurturing communities of artists from multiple backgrounds and entertained and enlightened audiences in the process.

Three of our most prominent and widely known poets -- Maya Angelou, Nikki Giovanni, and Amiri Baraka -- expanded their reputations and cemented their legacies over the last decade, and Elizabeth Alexander secured new and much larger audiences for her poetry after her reading at Barack Obama's first Presidential Inauguration. Toi Derricotte and Cornelius Eady have continued leading the ever-growing and influential poetry organization Cave Canem,  Joanne Gabbin facilitated a historic gathering of African American poets with Furious Flower Part II in 2004.

Between 2000 - 2012, poets contributed to several anthologies featuring poetry. During the same time period, Kevin Young produced an extraordinary body of work, including volumes of poetry, edited collections, and a scholarly work.

For these reasons and more, when observers look back on the first 12 years of the 21st century in African American poetry, they'll be inclined to note a tremendous amount of artistic activity and several notable accomplishments among poets.

Related:
Future Histories project
Posted by H. Rambsy at 8:51 AM