Returning to Ghana with Aldon Nielsen 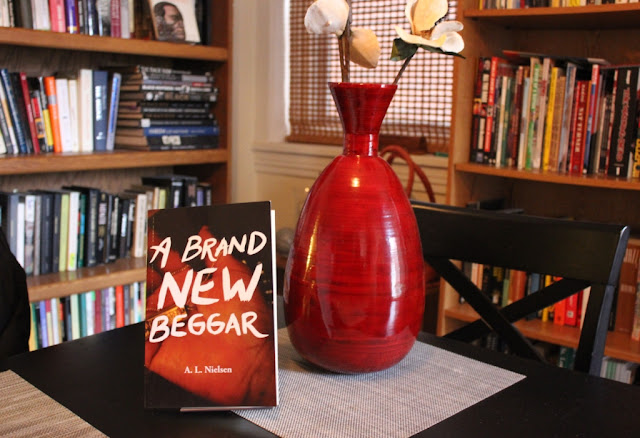 Recently,  a former professor,* Aldon Nielsen, sent me his latest volume of poetry A Brand New Beggar. When I flipped through the table of contents, I immediately knew where I wanted to begin--at the series of poems entitled "from Ghana."

I had traveled to that West African nation several years ago, and I recalled that Nielsen had traveled there a few years back as well. Somehow during our many conversations at conferences over the last few years, we neglected to exchange notes about our experiences in Ghana.

The series of poems in Nielsen's "from Ghana" section provided me with an opportunity to catch up on his reflections of the country. The section includes 18 short, untitled poems, or a small network of poetic impressions. The pieces are of varying length, with the longest ones about 12 to 13 lines, the shortest one a single line, and many containing 4 to 8 lines.

Nielsen was in Ghana in July 2008, which becomes apparent as one of the poems notes that "Word arrives that Jesse Helms has died," and another piece reveals that the poet is standing near Ghana's Independence Square on "America's Independence Day." Beyond the sense of time, the glimpses of place and environment were especially notable with Nielsen charting his observations in Accra and Kokrobite and in locales where "the city of lizards / Offers me citizenship."

Stimulating juxtapositions appear throughout the series as well. For instance, in one poem, he mentions the Ghanian leader Kwame Nkrumah who attended undergrad at Lincoln University in Pennsylvania and also corresponded with the Caribbean historian, writer, and intellectual C. L. R. James. In the next poem, Nielsen references seeing images on "silk screens" of Obama "From across the sea / Whose father was from / Across the continent." Thus, he cleverly or perhaps poetically references an African leader with American and Trinidadian  educational roots and nearby presents an American leader with African familial ties.

Nielsen's "from Ghana" constitutes a fascinating poetic journal. I'm looking forward to working my way through other sections of the volume. I'm also certain to return again to these impressions on Ghana--Nielsen's and my own.


------------------
*Note: Although I was never technically in Nielsen's classes while I was a grad student at Penn State, I sat in on enough of his lectures, received enough of his writing and professional advice, and followed enough of his guidance on poetry, jazz, and intellectual history to adequately pass as one of his students.
Posted by H. Rambsy at 10:46 AM