NBA’s Future History: how mathematicians and technology are changing the way we follow basketball 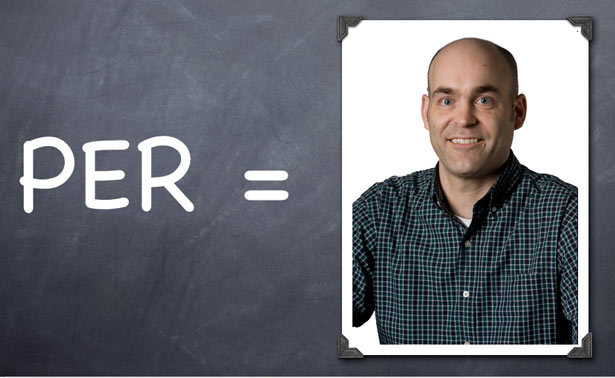 Years from now, we’ll have to look back on this moment as a time when we really became interested in statistics in the NBA. Spend a few minutes Googling basketball statistics and it is easy to get overwhelmed with websites like hoopdata.com, 82games.com, and basketball-reference.com. Even the official NBA website has released its own stats hub, highlighting a new culture in the league that strongly emphasizes quantifiable measures of play.

For example, look at John Hollinger: he created a statistic called the PER (Player Efficiency Rating) around 2004 then accepted a position this offseason to be the Memphis Grizzlies’ vice president of basketball operations. In short, Hollinger wielded his mathematical skills to quantify every single player’s basketball efficiency, thus creating a formula for comparing each player in the league. Combining his love for mathematics and his love for basketball, Hollinger spent the past decade analyzing basketball statistics on ESPN.com and transforming the way fans enjoy basketball in the process.

The emergence of new statistics like the PER and the popularity of nerds like Hollinger and Zach Lowe will remind us, years from now, of our increased interest in statistical efficiency. We will remember one of the main reasons we enjoy sports as much as we do involves the ability to quantify what we see in a way that we cannot do with something like the Beyoncé halftime show. How ever we might describe her performance, ultimately our argument is doomed for the pit of “opinion” – in the same way we would argue rapper X or Y is ‘the best in the world.' Those subjective positions are more likely avoided in sports, enhanced by the new wave of sports nerds.

While quantifying a players’ value is nothing new in, say, baseball, the game of basketball has traditionally been measured in terms of, what in retrospect was, a somewhat narrower view of quality. For years, Michael Jordan has been considered “the greatest player ever,” not because he ranks at the top of any statistical category, rather because of the way he played on the court. What has long been a sport measured by quality of play in a few select categories has entered a new realm where fans and executives believe in the importance of more detailed and multifaceted mathematical formulas to assess the quality of player performance.

As we look back at this moment in the NBA, we will notice the focus on statistics was pushed forward by technology as well. Half of the NBA teams have purchased data-tracking cameras, which follow players and teams during the game, allowing coaches and front office executives to calculate thousands and thousands of specific data sets. As strange as this sounds, we will look back and see that those data-tracking cameras are only a part of the beginning of a new way to watch and discuss basketball.

Related:
• Future Histories project
• The Basketball Project
Posted by H. Rambsy at 10:25 AM