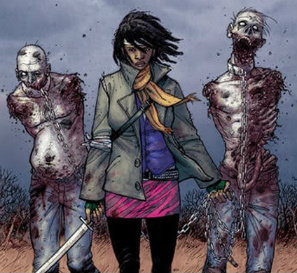 What if we start including Michonne from The Walking Dead into some of our conversations about bad men and women and culture heroes? What if we presented Michonne alongside some of the other unusual black women we study? Those are the kinds of questions we consider about that well-known character moving forward.

The comic book version of Michonne quickly developed a cult following based on her experiences and expertise with a katana or sword. She made her first appearance in Issue #19 (May 2005) traveling alone with two armless, jawless zombies. Her mysterious background and efficient skills vanquishing the undead made her one of the more compelling characters in the series.

Fans of the comic series were eager for Michonne to arrive on the television series, and she finally made her first appearance at the end of the second season. Michonne (portrayed by Danai Gurira) now has a regular role during the third season. She seems overly brutish and ill-tempered on the show. Her complex katana skills far outmatch her one-dimensional emotions.

Nonetheless, she remains intriguing, and perhaps paying attention to her presence in the series (in the comic book and on the show) as well as her reception might enhance our views concerning the representations of popular black women characters.