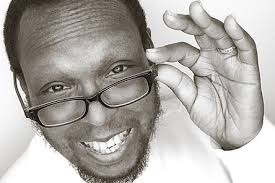 On Sunday, February 24, 2013, I attended a public lecture on black masculinity at the Missouri History Museum in St. Louis given by Dr. Mark Anthony Neal, Professor of African and African American Studies at Duke University and host of “Left of Black” a weekly webcast. In our coverage of Dr. Mark Anthony Neal as a writer and scholar, we’ve considered his productivity and use of web/social media in facilitating discussions and creating exchanges among a wide-ranging community.

Based on his forthcoming book, Looking for Leroy: Illegible Black Masculinities, Neal’s talk “Looking for Leroy: A Lecture on Black Masculinity” underscored the ways in which black males are portrayed and mis/understood in media and culture. Sunday would have been another opportunity to take to twitter on such a topic; unfortunately, there was no signal in the auditorium. Thus, I’m doing a bit of double-duty here. I’ve decided to share in blog format what I didn’t get to tweet, hence the hashtag/title #L4Leroy.

Neal took us on a journey of understanding the complex layers of black masculinity using a variety of black male figures such as Jack Johnson, Tiger Woods, O.J. Simpson, Leroy Jones, Avery Brooks, Trayvon Martin, Shawn Carter (the person) vs. Jay-Z (the brand) and Idris Elba’s character, Russell “Stringer” Bell, from HBO’s The Wire who represents what he calls the “ThugNiggaIntellectual”- one who is from the streets, but is a thinker, committed to the life of the mind and possesses the ability to turn street knowledge into cultural capital if/when given the opportunity.

There were several notable moments during his talk, but one of the most telling examples of this idea of legibility/illegibility was through audience participation. Neal raised the question of how many people had heard of Lebron James and many hands flew up. Yet, in his follow-up question, when asked how many people knew of Cullen Jones, many hands went down. This stark contrast, as Neal noted, points to the clear distinction in which “a black man/boy with a basketball is legible to us,” and Cullen Jones, a competitive swimmer and Olympic silver and gold medalist, is not.

In his closing remarks, Neal noted that “the lens that we see black masculinity is still infantilized.” Moving forward, it has definitely opened me up to consider the ways that black men’s legibility/illegibility can be integrated into some of our cultural programming, especially our work with  first-year black men at the university. Neal's presentation also allowed me to consider how such a reading of black masculinity correlates to or affects the legibility/illegibility of black femininities and feminisms.

****
Danielle Hall is a program coordinator and contributing writer for Black Studies @ SIUE.