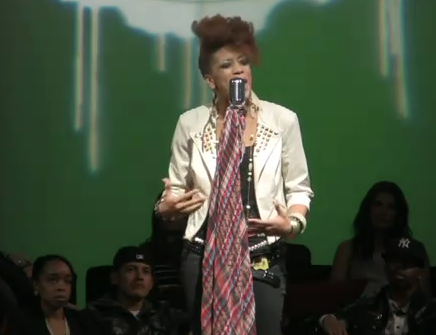 “The revolution will not be televised,” intoned poet Gil-Scott Heron. Yet, it may very well be broadcasted online in these highly technological times. With growing public interest in performance poetry, Youtube recordings of poet Janette...ikz (nee Janette McGhee), will take on significance in the future. One day when she has gone on to publish collections, thus writing for the page, viewers will look back at footage and be awed by the power of black women’s poetry on stage.

Janette...ikz, a spoken word poet, gained widespread public acclaim when her poem “I Will Wait for You”  at P4CM’s Lyrist Lounge. Her poem spread like wildfire via YouTube and social media posts in 2011. Reaching nearly two million views to date solely for that poem, Janette…ikz's performance went “viral.” With poetic content so relatable and an emotional delivery, the poem drew the sympathetic, empathetic ears of listeners who identified with her. These are a part of the number who have become fans of her work and will have bought her books years from now.

The poet’s command of the stage displays a certain confidence and comfort when she presents. In fact, she does not recite; she performs! Viewers see theatrics in her poetry whether through vocal power/control, singing, or added props, like costumes and make-up. “Ready or Not” perfectly exemplifies the poet’s theatricality. It births the idea that Janette…ikz will not only be remembered as a poet but perhaps as an actor, too, having starred in stage-plays, small screen, or even silver screen productions; a Jill Scott-like trajectory.

The often assumed one who wields the power of the pen may not always have the gift of performance, but Janette…ikz has both and has only just begun. Years from now, viewers will look back at clips of her and say that this was her then; a powerhouse in the making.

See more of Janette…ikz here: "The Truth Without Photoshop."

********
Cindy Lyles is a program coordinator and contributing writer for Black Studies @ SIUE.
Posted by H. Rambsy at 5:36 PM