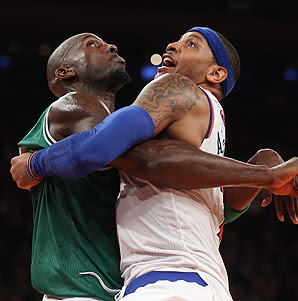 This widely circulated image was intensified by the related story of trash talking between KG and Melo that kept going and spilled over beyond the court. Ball players have always been known to trash talk, but only when someone gets upset, as Melo did, do we hear about the details of the trash talk. As far as the NBA goes, rather than hear trash talk, we're more likely to hear about it.

Folks were divided about the dispute. Some felt KG was wrong for allegedly "disrespecting" Melo's wife. On the other hand, some felt Melo was wrong for getting upset about trash talk (a no-no in verbal jousts).

Whatever the case, headlines including the word "fight" might have exaggerated the aesthetics of the image--featuring two recognizable figures locked in an apparent physical confrontation--more serious than I should have. A closer look reveals that their eyes are on the basketball and not each other; they are in fact just playing the game, which includes fighting for position to get a rebound. Of course, that particular image is presented as foreshadowing for the near-major physical conflict that did not take place in the parking lot after the game.

Related:
The Basketball Project
Posted by H. Rambsy at 8:56 AM

For an "insider" perspective, check out the "BS Report" podcast on Jan. 8 with Bill Simmons and former NBA player, Jalen Rose. They spend the first half hour discussing the "non-fight," as Rose provides his unique insight on the NBA culture of trash talk and fighting.

You can find the podcast here: http://espn.go.com/espnradio/grantland/player?id=8826763