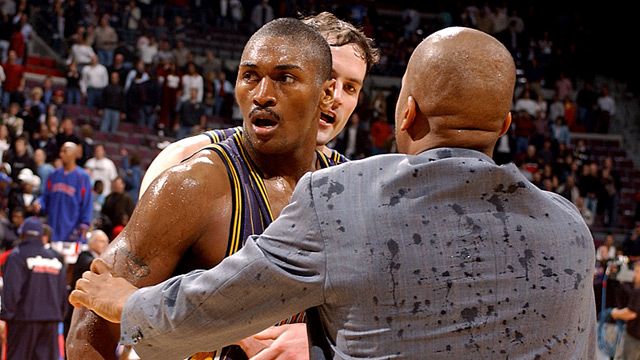 KG trash-talked Melo’s wife, and it’s national news – so what? In the rap world, this is just beef, and beef such as the 50 cent/Nelly feud didn’t make the front page of the New York Times. I seem to remember a time in the not-so-distant past when the police weren’t called because one player chose to confront another outside of the visiting locker room Ron Artest knows what’s up.

Basketball and hip-hop have always been intertwined: the early 2000’s was known as the “Bad Boy Era,” when hoops players showed up to press conferences in tall tee’s (as did the rappers they admired), spoke in non-grammatical English, and refused to talk about practice. Basketball was often referred to as “urban” by white commentators who didn’t know how to encounter the racial issues of a largely black, hip-hop influenced workforce. While the press conferences have changed, hip-hop aesthetics, seen specifically in the flaunting vocalizations and power struggles that take place on the court, is still ingrained in the NBA.

The “gangster” generation is fading away in the midst of a nation that is placing increased emphasis on safety and anti-violence movements, and the up-and-coming class of NBA players are expected to be professional and well-mannered – still competitive, but not conflict-oriented. In many ways, the NBA has transitioned from NWA to Jay-Z – city streets to clean-cut businessmen. No less inspired by the hip-hop world around them, but expressing it in different ways.

Related:
The Basketball Project
Posted by H. Rambsy at 8:50 AM