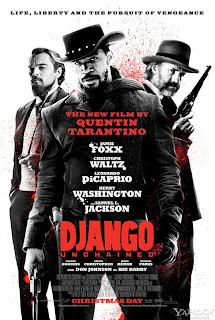 In Quentin Tarantino's film Django Unchained, two of the enslaved people have an "R" branded on their faces. In the movie, the "R" stands for runaway.  The brand was punishment for having tried to escape. Typically, slaves were branded for identification and ownership purposes.

When I heard the reference to the "R" branding in the film, I immediately thought of Robert Hayden's poem "Runagate Runagate," which describes enslaved people escaping.

At one point in the poem, an owner describes his "property":


If you see my Pompey, 30 yrs of age,
new breeches, plain stockings, negro shoes;
if you see my Anna, likely young mulatto
branded E on the right cheek, R on the left,
catch them if you can and notify subscriber.

Some scholars have noted that the "E" and "R," or "ER" stands for Elizabeth Regina, that is, Elizabeth the Queen. Those brands would have made it easier for those slaves to identified and thus tracked.