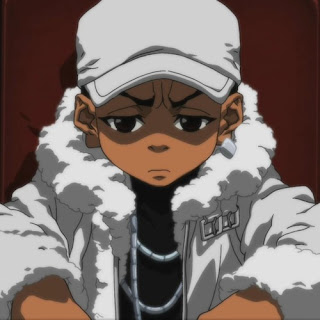 "My aesthetics were pretty much shaped by hip-hop." -- Ta-Nehisi Coates

When and if you read Ta-Nehisi Coates, Aaron McGruder, Colson Whitehead, and Kevin Young, you'll notice, among other features, references to rap music and rappers. That's especially the case with Coates and McGruder, but you also witness rap references and related practices in Whitehead's and Young's works. Like several artists of their generation, these four writers' works absorb and display hip hop aesthetics.

Hip hop aesthetics are an outgrowth of black aesthetics--that broad label for concepts and ways of knowing rooted to African American interests, audiences/communities and distinct artistic and social practices. At the same time, hip hop aesthetics comprise a range of presumably non-black worldviews, artifacts, modes of expression, and pop culture phenomena. For decades now, rap artists have been known to search for and utilize a broad body of multi-cultural and multi-racial source materials.

As a writer and visual artist, McGruder's links to hip hop aesthetics were especially apparent to audiences. His comic strip The Boondocks repeatedly referenced rap artists by name, and he often bemoaned the decline of the Golden Era of Hip Hop while ridiculing the rise of the art-form's more blatant commercialism and destructiveness. McGruder's character Riley was often used to highlight what happens when hip hop goes wrong.

Though less direct than McGruder, Coates does indicate losing interest in aspects of rap, or better yet, like many long-time listeners, Coates's interests have evolved and matured beyond some of the more childish or youthful aspects of the genre. Still, his blog entries periodically mention rap, and his memoir The Beautiful Struggle serves as a wonderful reflection on how hip hop contributed to the young Coates's early intellectual development. The young guys in my classes are quick to point out that The Beautiful Struggle is also the name of a 2004 album by rapper Talib Kweli. Yeah, I tell them, but the phrase also appears in a speech by Martin Luther King, Jr., which likely served as a key reference for Coates.

Beyond the direct references to music and musicians, Coates recently noted that


I believe in art as a melange of things, and my favorite literature generally pulls from a variety of places. This is more than the idea of mashups, and perhaps even beyond sampling. I am more thinking about how the Bomb Squad [production team for Public Enemy] in their heyday could pull from five different records and make an entirely new one. Or (to some extent) the masterful chopping of DJ Premier. Maybe some Rza too.


The "masterful chopping" that Coates refers to serves as a defining characteristic of writings by Whitehead and Young. Think about The Intuitionist (1999) and especially John Henry Days (2001) by Whitehead and how those novels pull from so much different source material in order to offer something new. Or consider Young's expansive channeling and sampling of Jean-Michel Basquiat in To Repel Ghosts (2001), which was re-issued as To Repel Ghosts: The Remix (2005). In Young's recent prose work The Grey Album (2012), he charts his direct links to the music by noting that he was once a hip hop DJ in college, and more notably, his inclusion of such a wide range of source materials in the production of a "black" project corresponds to the art of rap.

Sampling and mashups, no doubt, predate hip hop; however, to the extent that Whitehead (b. 1969), Young (b. 1970), McGruder (b. 1974), and Coates (b. 1975) came of age during formative stages of rap music's development give us reasons to consider how hip hop aesthetics inform their works.
Posted by H. Rambsy at 9:42 AM