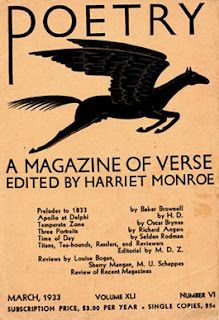 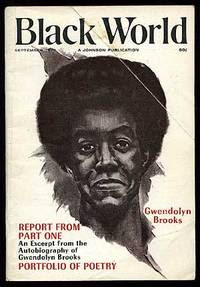 If we're going to talk demographics, including attention to regions, and African American poetry over a long period of time, then of course we have to talk about those two centers of power Chicago and New York City. Throughout the histories of African American poetry, those cities have been especially important for large groupings of interrelated writers. Within the Chicago context, we might look at Poetry magazine on the one hand and then Black World magazine (formerly known as Negro Digest) on the other hand as being crucial publication venues.

Langston Hughes, Sterling Brown, Gwendolyn Brooks, Melvin B. Tolson, Margaret Walker, and others published some of their early works in Poetry. Most notably, Brooks's "We Real Cool" and Walker's "For My People" first appeared in the periodical. Those poems, as you know, have gone on to become two of the most widely circulating poems in African American and American literature.

Negro Digest/Black World published hundreds of poems by dozens of writers, especially during the black arts era of the 1960s and 1970s. No other magazine, featuring African American writers, had such an extended reach. In addition to featuring poems and poets, the magazine also included essays about poetry by various commentators, including poets, and thus shaped some of the most important discussions and debates of the era.

Given their importance as key sites for the publication, Poetry magazine and Black World are significant subjects and resources for a project on the demographics of African American poetry.