Where are you, Octavia Butler? 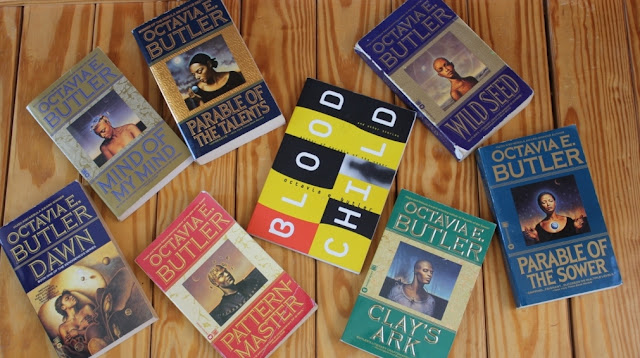 I find myself considering genre more and more lately, particularly because my main research and writing project takes me in and out of several different genres in fiction and theory. My attempts to locate one of my favorite writers have fueled my thoughts, and questions, about genre. Where are you, Octavia Butler?

A trip into Barnes and Noble or Half Price Books will not answer this question, at least not in a way that is satisfactory to me. Publishers and bookstores certainly have quite a bit (monetarily) at stake when it comes to identifying genres for publications, but we as readers can often be confined to the categorical genres imposed by these entities. The last time I went to Barnes and Noble, I found Butler not in the Science Fiction section, but in the very general Fiction area; in Half Price Books, her work was in American Fiction.

Butler’s work should be considered in relation to several genres – the more genres, the more people who have access to and awareness of her work. Butler began writing Sci Fi because she didn’t see herself, a young Black woman, in the Sci Fi movies and books she enjoyed. Her work, including Dawn, Wild Seed, and Kindred can all be considered Sci Fi due to the tropes of time travel, alien encounters, and supernatural powers, but her work is also specifically African American – her protagonists, mostly women, are Black and confront issues of racism, sexism, classism, and all the complicated and difficult aspects of intersectional identity.

Am I saying Butler’s work is not Fiction or American Fiction? Certainly not. What I am saying is that there are assumptions about genre – some carry more intellectual/academic weight, particularly in academia, and others carry more financial weight. Science Fiction, compared to various other genres, is not, well, weighty (in both senses!). Historically, readers of Sci Fi have been white and male…and the same goes for Sci Fi authors.

But the demographics of Sci Fi audiences have shifted, though that may not be apparent when glancing at the shelves of your local bookstore (and often local, non-chain bookstores are more specific with genres and are aware of the political and financial aspects of categorizing books…issues that are made invisible at larger chains). Where does this leave Black Science Fiction authors and texts? Where does this leave Octavia Butler?

Butler is an important author in any category, yet her work is often not housed in the genre she specifically used to articulate an absence she saw. That absence on the Science Fiction shelves is still there, but there are many Black authors writing Sci Fi – Samuel Delaney was one of the first, along with Octavia Butler, and now Nalo Hopkinson, Nisi Shawl, Derrick Bell, and many more. Their work should be found on the shelves in the genres of Black Literature, Fiction, Speculative Fiction, and yes – Science Fiction.

***********
Erin Ranft is a graduate student in the English program at University of Texas San Antonio. She writes about feminist science fiction, Black and Chicana feminisms, and the oppressions of US women’s bodies in the 19th and 20th centuries.
Posted by H. Rambsy at 7:13 PM