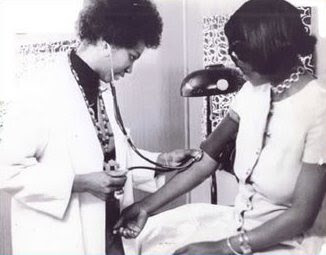 In chapter 3 of Body and Soul, Alondra Nelson focuses on how the BPP developed free clinics to address the inadequate healthcare treatment being provided to African Americans. Nelson highlights two key articles – the story of James Anthony Nero and the horrors of healthcare for African Americans – published in the BPP newspaper.

James Anthony Nero was an African American infant in Brooklyn, New York, who suffered from a fever and chest congestion. He was taken to the hospital, misdiagnosed, and sent home. Several days later he died (75). The BPP newspaper ran another article addressing the nature of “unprofessional,” understaffed, and “disrespectful” health services for African Americans. The article goes to explain why these clinics are poorly represented and compares the difference between private-owned hospitals and free clinics (76).

The circumstances of Nero and the clinics helped inspire the Black Panther Party, who in turn opened several institutions run by party members and volunteers known as People’s Free Medical Clinics (PFMC).

Nelson concentrates on how establishing these new independent clinics became a blueprint for heath reformation. The clinics offered medical operations and were also considered wellness facilities. People were able to receive information on housing issues, physical health, and legal aid. “The Party’s health activism,” noted Nelson, “both within and beyond its clinics, was distinctive in its attention to class, health, and race” (114).

The benefits of these new institutions were prominent, but the struggles persisted. Public health agencies attempted to close these BPP institutions, claiming that they were not in compliance with city laws. In some instances they succeeded, but by 1971, the Panther party had established national health clinics.

*******
Briana Whiteside is a graduate student in English at SIUE and a contributing writer for the Black Studies Program.
Posted by H. Rambsy at 7:28 PM