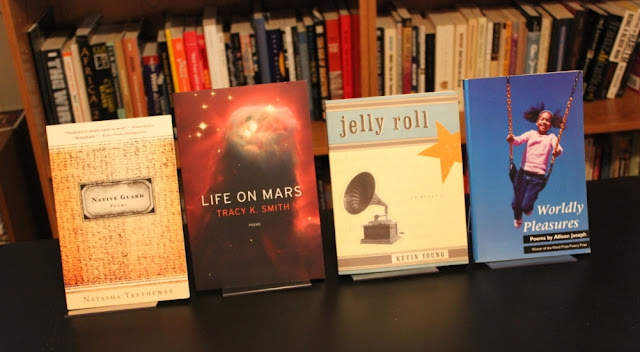 Recently, I was wondering about poets born during the late 1960s and early 1970s. Consider the birth years of the following poets:

Now those are not enough poets to come to any solid conclusions, but it's still worth noting how distinguished the careers of those figures have been. They have all published multiple books and received several  awards. Trethewey and Smith, for instance, earned Pulitzer Prizes in poetry; Young is a National Poetry Series Winner; and Hayes won the National Book Award for Poetry.

Four of the writers -- Jackson, Smith, Trethewey, and Young -- were members of the Dark Room Collective, suggesting that in addition to age, affiliations matter as well. During the 1990s as funding and awarding opportunities began to expand for poets, especially as opposed to the 1980s, the poets listed above where in their mid to late 20s. Certainly not all and probably not even enough black poets benefited, but some, like those mentioned here did.

Sure, they are all talented, hardworking literary artists. But I do suspect that there are external social and historical factors that can ensure some talented poets have more outstanding careers than other talented poets. By the way, it's interesting that the late 1960s and early 1970s represent golden birth years for rappers as well.

I'm teaching a number of writers of this generation in my graduate seminar on African American literature this semester. Thematically, I think it's interesting how these writers bridge the Civil Rights Era and the complicated decades that followed. This plays out in a shared ambivalence about American political possibility, I think.

Thanks for the comment. I'm glad to hear about one place that these poets might show up in a classroom.

It also stands out to me that in general more writers of that generation seem to have become known than the writers born during the 1950s.