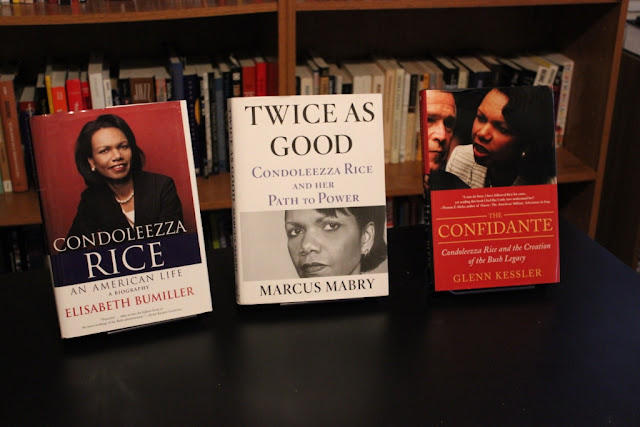 Six or so years ago, I was doing extensive research on what I thought would become an article on Secretary of State Condoleezza Rice. I was likely out of my league--a junior literature professor attempting to write about a political figure, and my positioning  in liberal and progressive circles further distanced me from a figure associated with conservatism. Nonetheless, I pursued research activities, identifying and reading dozens of articles about Rice.

Although many people found her upbringing fascinating, Rice's links to George W. Bush, her involvement in the decision for the U.S. to go to war with Iraq over "weapons of mass destruction," and her seeming distance from black people in general prevented her from becoming more central to African American intellectual discourses. With my own tenure clock ticking, it became more important for me to concentrate my main research and writing energies on more traditional topics within my discipline. If I was an active blogger at that time, perhaps I would have probably written several entries about Rice and the expansive commentary featuring her as a subject.

In the time it took me to secure tenure and attain additional writing time and space, Condi Rice had been replaced as the "it" black person in national and international political news by Barack Obama. The rise of Barack and Michelle Obama hastened the declining interest in Rice, and perhaps her departure from the public scene also signaled the shift in attention from a high profile black woman in an international context. (Susan Rice, no relation to Condi, is Obama's ambassador to the United Nations and an active player in international strategy, but for some reason, she does not have an especially high public or popular profile).

In retrospect, we've done a better and more extensive job situating Barack Obama within black intellectual histories than we did Condi Rice. That idea came to me as I was reading Ta-Nehisi Coates's extensive article on Obama, which does a really wonderful job of locating the President along these multiples lines of thought in African American cultural and political discourses. Years ago, Coates wrote a short piece on Rice for The Village Voice, at the time though, he was not yet in the position to produce a really sprawling essay on her, not on the level that he's now producing for The Atlantic.

To some extent, Condi Rice helped prime Coates, Robin Givhan, Oprah Winfrey, and countless other writers and commentators for how they would approach covering Barack and Michelle Obama. However, what did not carry over as much was the focus on international contexts. Interestingly, progressives are troubled that Obama's policies against suspected U.S. enemies often place him too comfortably in league with Rice, or even worse, with Dick Cheney.

The other day, I asked the students in one of my courses to identity a prominent black woman political figure. The first name that several of the sisters--all first-year college students--said in unison was Condoleezza Rice.