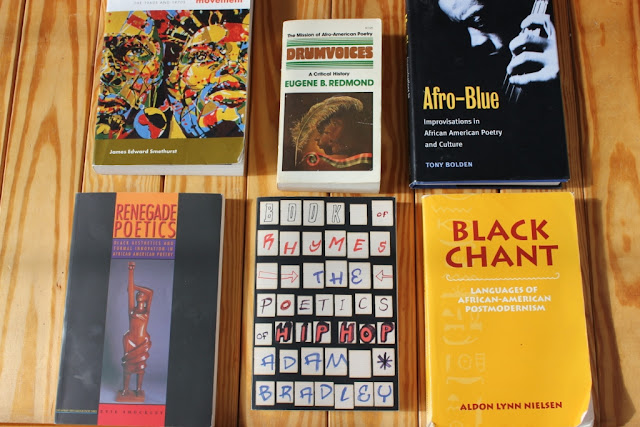 Unlike my list of 105 volumes of poetry published since 2000, my list of scholarly books on African American poetry is far shorter. In comparison to the broader body of literary scholarship, there are a relatively small number of book-length works that concentrate on poetry.

Early on, a key book for me was Eugene B. Redmond's Drumvoices: The Mission of Afro-American Poetry (1976). The scholars and works listed here do not represent a comprehensive list by the way, just some of the books useful for me as I worked on my own book, The Black Arts Enterprise (2011).

2004 -- Wrestling with the Muse: Dudley Randall and the Broadside Press by Melba Joyce Boyd

2004 --  'After Mecca': Women Poets and the Black Arts Movement by Cheryl Clarke

2011 -- The Muse is Music: Jazz Poetry from the Harlem Renaissance to Spoken Word by Meta DuEwa Jones

2012 -- The Grey Album: On the Blackness of Blackness by Kevin Young

Related:
• Black Intellectual Histories
Posted by H. Rambsy at 9:11 AM

If you like Book of Rhymes, there's another really great book that breaks down the poetics of hip-hop, in the words of a lot of interviewed rappers... it's called "How to Rap: The Art & Science of the Hip-Hop MC"