Hunting for Easter Eggs; or Understanding the Visual Signifying of Rob Guillory 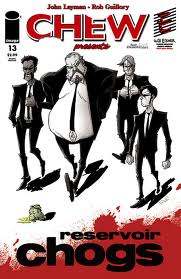 If you read online commentary and interviews about artist Rob Guillory's work on the award-winning comic book Chew, you'll notice recurring mentions of "Easter Eggs," which are visual inside or somewhat hidden jokes that an artist usually places somewhere in the background of an individual page. Discovering Easter eggs in comic books requires a bit of close (visual) reading and knowledge of pop culture or the various discourses that artists draw from and allude to in the works.

The inclusion of Easter eggs can make the experience of reading comics closely or multiple times rewarding. As Guillory noted in one interview, "I want the readers to be able to pick up Chew ten years from now, and still find something funny that they'd never noticed before. It's another way to give the reader the most enjoyment possible for their buck."

Guillory has developed a reputation for including Easter Eggs in each issue of Chew, so readers are always on the look for the jokes lurking in the background waiting to be opened. The presence of the eggs reveals the creativity of artists as well as their attentiveness to playing with details as a way of communicating subtly with their audiences. The attention to playfulness had me thinking about Guillory's Easter eggs and the practice and art of signifying.

In the past, signifying was often highlighted as a verbal practice where African Americans made sly, inside jokes to mock those in authority positions. In simpler terms, signifying refers to playful allusions and inside jokes. Scholarly conversations concerning signifying often related to African American literature following the wide success of Henry Louis Gates Jr.'s book The Signifying Monkey: A Theory of African-American Literary Criticism (1988). But just as literary artists can signify, so can musicians and so can a visual artist like Guillory.

Thinking of Guillory's artistic creations in Chew as forms of signifying has been one way that I've thought about his background jokes as well as drawing of comic book characters who allude to real life actors. The character Caesar Valenzano no doubt is a play on Samuel Jackson's Pulp Fiction character Jules Winnfield. Many other characters in the comic book allude to various other real world figures, actors, and types.

When you read Guillory's art, you'll end up hunting for Easter eggs, which is another way of saying, you'll follow along as he's signifying.