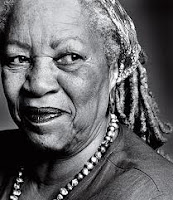 A few years ago when scholar Joycelyn Moody was then editor of African American Review, one of the field's leading journals, she noticed a daily trend. Every day....every single day, for over a year, the journal received two common submissions: essays focused on Toni Morrison and poems composed and sent in by prisoners from across the country.

The receipt of scholarly essays concentrating on Toni Morrison each day for an entire year is quite remarkable. That is, over the course of 12 months, AAR received more than 365 essays concentrating on the works of a single literary artist.  Even though the journal publishes only a fraction of its essays on the novelist, each issue still contains one and sometimes two articles on Morrison. As a result, some of us jokingly refer to AAR as the TMR, the Toni Morrison Review.

A number of the incarcerated women and primarily men who sent their poems in for possible publication were likely aware of poet Etheridge Knight, who was serving time in prison when he was "discovered" by Broadside Press publisher Dudley Randall. The journal title -- African American Review -- is perhaps a signal that inmates might find a receptive audience by submitting their work. So hundreds of envelopes with inmate identification numbers and the return addresses of prison facilities arrive to the AAR office each day.

Imagine that the many, many published essays on Toni Morrison and the published dozens of poems that we encounter are only the smallest tip of the iceberg of what really exists out there.
Posted by H. Rambsy at 7:36 AM