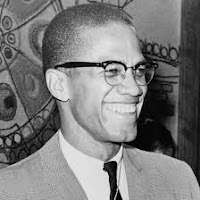 Last week, Allegra Castro, a scholar from the University of Texas at San Antonio, was discussing satire with the Fellows in the African American Literatures and Cultures Institute. Although satire has broad definitions and functions, one short way to consider it, noted Allegra drawing on a definition offered by scholar Darryl Dickson-Carr would be as follows: "humor with attitude."  Yep! Humor....with attitude.

Among other topics, ever since Castro offered that succinct definition, I've applied it to a speech by our main man Malcolm. There are too many moments too count in Malcolm's "Message to the Grassroots," where he's displaying --what? -- yep: humor with...attitude.

At one point, for instance, Malcolm is talking about his time when he was incarcerated and interrupts himself mid-sentence to inform his audience that they, too, are behind bars. He went, "When I was prison, I read an article, and..don’t be shocked when I say I was in prison. You still in prison. That’s what America means: prison." The play on "I was in prison" and "You still in prison" is part of what amuses his audience, not to mention Malcolm's audacity to tell them ("you") that they are, in fact, locked up.  He's being funny, but it's humor...with attitude.

Later in the speech, Malcolm pulls off a fascinating analogy about house Negroes and field Negroes. If his words were performed today in front of an audience, it would be easily considered a brilliant comedy standup routine. Malcolm first discusses house Negroes during slavery and then offers an update by mentioning how they act during "modern" times:

Those opening sentences lead the audience members to shout approvals ("preach!"), and when Malcolm reaches the words "you nothing," he fills his voice with strong disdain. It's a powerful display of humor with attitude.

Malcolm is rightly celebrated as a fiery militant, a radical leader, a vital black power icon. It's possible, though, with his blends of comedy and seriousness that we might also refer to him as one of our great political satirists.
Posted by H. Rambsy at 8:43 AM