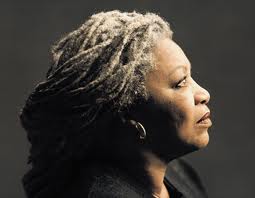 In a recent feature article, Toni Morrison expresses her disappointment with "the box you’re put in as a Black Writer.” Observers rarely noted, says Morrison, that when she won the Nobel Prize of Literature, "I felt profoundly American...but you’re never out there as somebody from Ohio, or even as a writer."  Morrison also dislikes that she is regularly grouped together with Maya Angelou and Alice Walker since "they’re very different writers, very, very different from me.”

Given her enormous stature within and beyond conventional literary groupings, it's understandable that Morrison would find the black writer box confining. Few, if any, living writers have garnered the level of critical acclaim and interest. Her writings possess a level of richness and complexity that appeal to readers and scholars across a range of disciplines.

Placing Morrison's work in a black box, especially if that box is narrowly defined, could be a problem. For one, putting her within that box overlooks the degrees to which she is unlike so many fellow African American writers. Of course, she doesn't fit neatly in a narrowly defined woman writer box or any other box for that matter.

Although the black writer box might not work for Morrison, being an emerging writer that is placed in a box with the established novelist could be vital. Shortly after the publication of his first book The Intuitionist, Colson Whitehead was linked to Toni Morrison and Ralph Ellison box. The front cover of the paperback edition of his book displays an observation from Time reviewer Walter Kirn that Whitehead's novel was "The freshest racial allegory since Ralph Ellison's Invisible Man and Toni Morrison's The Bluest Eye." What novelist wouldn't want to be placed in that box?

At the beginning of Morrison's career, she was placed in a black studies box, or more specifically, a black studies program placed The Bluest Eye on required reading lists. That helped keep the novel from vanishing. Perhaps boxes are sometimes better at the beginning of a black writer's career and more limiting and frustrating later on. Or, perhaps, boxes or categories are fine; it's the problem of a single small box that can be a problem.
Posted by H. Rambsy at 10:53 AM