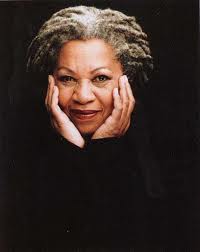 Like most universities, our school's library has all of Toni Morrison's novels and several scholarly works that examine the author's works. No black writer and relatively few writers of other backgrounds are more critically acclaimed and discussed in scholarly discourses than Morrison. Her work is regularly examined and assigned by literary, Women's Studies, and Black Studies scholars, to name a few.

Although Lovejoy Library has had many of Morrison's works for decades, the collection of works by and about her increased in recent years when the English Department began to offer a "Major Author" course focused on Morrison. I wrote the proposal for the course, and Julie Hansen took steps to order even more works about Morrison for the library realizing that professors and our literature students would likely want to pursue additional readings related to the novelist.

The introduction of the Morrison class as a "Major Author" course, by the way, was a breakthrough of sorts for the English department. That course represents the first and only designated major author for a writer who is a woman and African American. The course is likely the only one our university offers that focuses on a black woman.

Morrison's works and ideas have certainly been central to some of the ways that we think about black studies nationally and locally here at SIUE. Among other sources, our decision to refer to our third floor cultural space as the Underground Reading Room corresponds to a tradition of African American word-play, highlighted in fascinating ways in Morrison's Song of Solomon.  For instance, black residents refer to the major hospital as No Mercy Hospital since the health institution refused to admit African Americans, and when city officials insisted that the street where the lone black doctor lived  should not be  called "Doctor Street," African Americans cleverly obliged by calling it "Not Doctor Street."