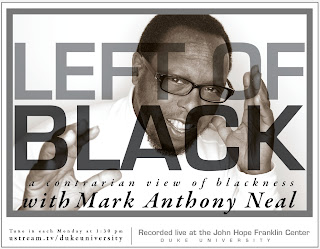 At various points during the Black Thought 2.0 conference, several of us took moments to give shout outs to Mark Anthony Neal for hosting. He deserves a lot of credit for pulling together such a wide, diverse range of people to talk about common ideas related to digital technologies and social media.

What he also did and what was perhaps not commented on enough was the role he played in sharing his audience, which he's been developing over the years. Most recently, he has been solidifying and expanding devoted followings on his blog, twitter, and his popular web series Left of Black. Weeks ahead of Black Thought 2.0, Neal's followers and audiences were certainly being made aware of the upcoming event.

Although some of the participants already had sizable online audiences, I imagine that everyone benefited from the exposure that Neal could offer, not that providing participants with an audience was the point. Still, that distinct and increased exposure was a significant aspect of the event. More than 60 people attended in person, more than 800 people tuned in live on ustream, and large numbers participated on twitter.

There's little discussion about approaches to establishing and sharing audiences in the ever-popular conversations about "the role of the black public intellectual." Yet Neal seemed to be offering a possibility of what such sharing might look like.