The Boondocks & the Non-complimentary Book Blurb 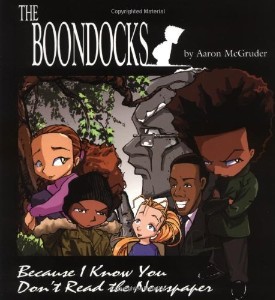 The following blurbs appeared on the back of Aaron McGruder's first collection of strips, The Boondocks: Because I Know You Don't Read the Newspaper (2000):


"The most appalling of McGruder's reckless charges was that BET 'does not serve the interest of black people.' Our response to this slanderous assertion is that the 500-plus dedicated employees of BET do more in one day to serve the interest of African-Americans than this young man has done in his entire life."
--Robert Johnson, President and CEO, BET Holdings, Inc.

"The Boondocks is a deliciously amusing work that creatively challenges us with intense substance, cleverly disguised as a humorous comic strip. Aaron McGruder is one of the most important voices of his generation and a true credit to his race."
--Tavis Smiley, Author and Host of BET Tonight

Smiley and Johnson would eventually part ways, and in some ways, their contradictory book blurbs seemed to foreshadow their differences.

The Johnson quotation is especially notable since book blurbs are typically laudatory. However, this non-complimentary blurb effectively suggests that McGruder makes "appalling," "reckless," and "slanderous" remarks.

Of course, the fact that McGruder and his 10-year-old protagonist might cause problems for a powerful CEO likely helped build street cred and broad interest in The Boondocks.


Related: Aaron McGruder Week
Posted by H. Rambsy at 10:11 AM