Friday, February 10, the Black Studies Program coordinated a media exhibit poetry exhibit for the approximately 125 third graders at Columbus Elementary School in Edwardsville, Illinois.  Our program's former coordinator and ongoing contributor Adrienne Smith, who now works as an assistant at Columbus, invited us and hosted our visit to the elementary school.

The third graders visited the exhibit in 5 sets of 25 students every 30 minutes during the early part of the school day. We opened each visit by briefly providing an overview of the exhibit contents. We then gave the students the freedom to explore the different poems and images. 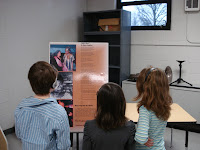 The students used our audio devices to listen to the poets reading their works. The presence of the printed poems on the posters made it possible for the students to follow or read along with the recordings. Since our contributor Al Henderson had added upbeat instrumentals as background music for most of the poems, many of the third graders danced as they read and moved around the exhibit.

The students and their teachers expressed having a good time at the event. This was the first time that we organized a mixed media exhibit for such young readers, so we were especially pleased with the positive and enthusiastic responses we received.
Posted by H. Rambsy at 8:07 AM