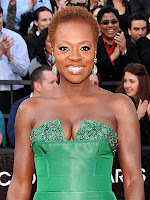 One of the major trending topics last night on twitter and a popular discussion topic on facebook was Viola Davis at the Academy Awards. She didn't win an Oscar, but she did have a major victory of sorts.

For the first time for such a major event, she rocked a natural. Whereas she usually wears wigs, she decided to take what amounted to a bolder step by presenting her hair free from the typical mask.

A few weeks ago, observers took notice of Davis in an article for the LA Times. It was one of the first major, big-time photoshoots where she was featured with her natural.

On Oscar night, all eyes were on the red carpet, and when she showed up with no wig, well, the buzz followed. For sisters interested in rocking naturals, Davis's choice of representation was an important public moment, if not a breakthrough.
Posted by H. Rambsy at 5:47 PM