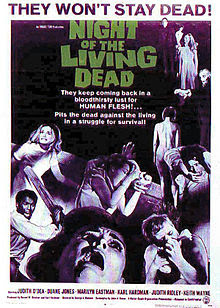 It wasn't simply rap and Star Wars that stimulated the minds of a few black boys who went on to become major writers. Zombies were also important, at least in one notable recent instance.

"Movies were my true primer," said Whitehead in an interview with Harper's. "The glorious feel-bad dystopian flicks of the 1960s and 1970s. The inexplicable monsters of Night of the Living Dead and Dawn of the Dead were my template for this book [Zone One]."

Whitehead was a pre-teen when he first saw George Romero's Night of the Living Dead. The monstrous ideas and gruesome figures that the young Whitehead encountered  in the film would have a lasting effect and re-emerge decades later in distinct literary fashion in Zone One. Like Romero who cast Duane Jones as the lead in his film, Whitehead presents an African American male as the protagonist of his novel.

In the Harper's interview, Whitehead pointed out the racial implication's of Romero's film starring an African American trying to escape the undead: "Night of the Living Dead is the story of a black man on the run from the mob of white people who want to destroy him, literally devour him — in other words, it’s a crucial subplot of the America narrative."

The zombie films that Whitehead watched as a youngster became aspects of mental footage that he eventually reworked and re-imagined for Zone One. In the past, major black novelists consulted history books and old newspaper articles to compose their works; Whitehead's research, on the other hand, involved the tasks of recalling and re-watching horror films. For over a century now, childhood memories have fueled the imaginations and works of African American novelists much to write about. So it was with Whitehead, though some of his youthful recollections included  apocalyptic scenes and hordes of undead flesh-eaters.