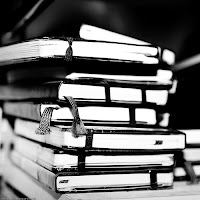 There's a moment--really several moments--in Ta-Nehisi Coates's memoir The Beautiful Struggle where he mentions the empowering possibilities of rap. In particular, he describes how spending time trying to write rhymes made him feel better. "Even though I was alone," wrote Coates, "I felt bigger."

There were incredible odds out there, Coates acknowledged. However, "the rhyme pad  was a spell book--it summoned asphalt elementals, elder gods, and weeping ancestors, all of whom had your back" (111). There was something magical about the practice of writing and reciting raps that gave Coates emotional and psychological strength.

Jay-Z makes similar observations in his book Decoded. He recalls a moment at age nine when he became inspired to rap after witnessing an older boy in the neighborhood freestyling. "That night, I started writing rhymes in my spiral notebook," Jay-Z remembers. "From the beginning it was easy, a constant flow. For days I filled page after page."

He goes on to describe how his mother eventually gave him a three-ring binder for him to keep all his rhymes. After a friend "peeked inside my notebook" and later started "reciting m rhymes like they were his," Jay-Z "started writing real tiny so no one could steal my lyrics, and then I started straight hiding my book, stuffing it in my mattress like it was cash. Everywhere I went I'd write."

There are, no doubt, a million things to say about the problems with rap. The celebrations of violence and materialism. The misogyny. The list goes on.

But it's fascinating reading about the young Coates and Jay-Z becoming empowered through the acts of writing and reciting raps.