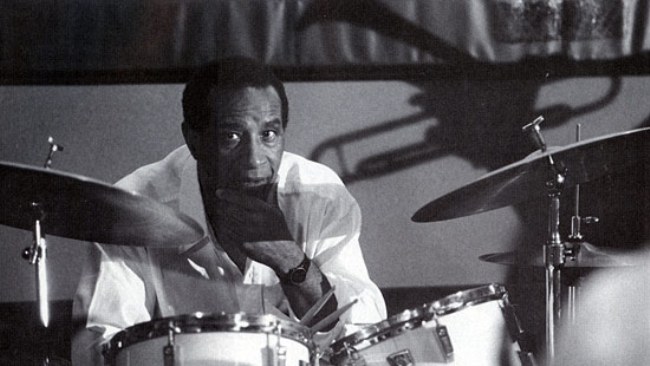 Amiri Baraka's poem "Digging Max (At Seventy Five, All the Way Live!)" is an important contribution to the expansive body of jazz poetry, and more than that, it's a powerful tribute to the jazz drummer Max Roach, not to mention dozens more musicians. Baraka first presented "Digging" in 1999 for Roach's 75th birthday party. Baraka read the poem again as a tribute at Roach's funeral in New York City on August 24, 2007.

Baraka opens the poem by announcing that "Max is the highest / The outset, the /
Largest, the greatest." He goes on to note that "when we say MAX," we link him to a long line of ideas for artists including "Djali, Nzuri Ngoma, / Señor Congero, Leader, Mwalimu, / Scientist of Sound, Sonic Designer."

From there, Baraka goes on to link Roach to numerous musicians, including drummers Papa Joe, Philly Joe Jones, Rashied Ali, Daniel Ray and instrumentalists Sonny Rollins, Pharaoh Sanders, David Murray, Miles Davis, Trane, and others. In all, Baraka weaves in the names and references to more than 50 musicians.

I doubt "Digging" would fit standard definitions of a good literary poem. But as Miles and crew intoned half a century ago: So what? Baraka's poem achieves all kinds of communal goodness and extends the tradition of the jazz tribute poem, which has a long history among African American poets. That tradition of the jazz tribute poem reached new heights during the black arts era when poems by Baraka, Sonia Sanchez, Jayne Cortez, Quincey Troupe, and several other poets were frequently published in magazines and anthologies.

The reading of that Max Roach poem at his funeral in 2007 was a reminder and extension of that tradition of tributes. And with shout-outs to more than 50 of our greatest musicians, Baraka's "Digging" is a marvelous guide to the history of jazz.