Years ago, I came across Larry Neal's essay "Ellison‘s Zoot Suit: Politics as Ritual" in the December 1970 issue of Black World magazine. Neal examines and affirms Ellison's work and perspective, a notable shift from his afterword to the anthology Black Fire where he had critiqued Ellison.

I was in graduate school at the time I encountered the essay, and reading it made me value both Neal and Ellison all the more. Among other things, I came across a section in the essay where Neal quotes Ellison as saying "Anyway, I think style is more important than political ideologies." 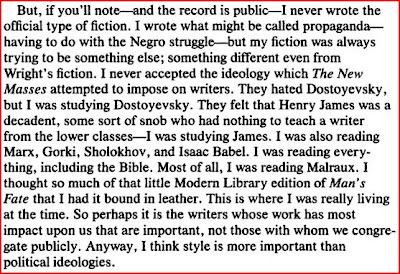 The closing line about style has stayed with me over the years, and I have wrestled with it as I've thought about and participated in discussions concerning form vs. content, style vs. political ideologies, or this kind of writing and performance style vs. that kind of writing and performance style. Of course, I typically understand that it is hard to separate those kinds of things, but still, somehow, they come up as folks talk about artistic production and aesthetics.

The quotation, by the way, is from an interview entitled "A Very Stern Discipline: An Interview with Ralph Ellison" conducted by Steve Cannon, Lennox Raphael, and James Thompson from the March 1967 issue of Harper's Magazine. The interview is included in Conversations With Ralph Ellison, most of which can be accessed via Google Books. The interview appears on pages 109-135, and the specific quotation is from 124.
Posted by H. Rambsy at 12:36 PM