From Chicago (to SIUE) to NYC 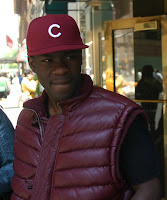 This past Thursday, one, no, two highlights of our New York exhibit were pieces produced by Dometi Pongo on his experiences traveling to the city with our Black Studies crew.  Visitors to the exhibited enjoyed hearing our man's verses about making moves from the C.H.I. to N.Y.C.

From C.H.I. to N.Y. that's where I'm in
From Manhattan to the Brook L.Y.N.
Fix my Yankee fitted as I'm walking down Lennox
Down the street from the casket with Langston Hughes' ashes
Flash to 5th Ave., performance on every corner
Where Israelites adorned in yarnings preaching warnings
Times Square look like diamonds how it’s shinin'
In Chinatown buyin' fake Louis Vuitton
In Central Park placin' bets on chess, I'm still grindin'
Only place I haven't gone is the Bronx and Staten Island.
And honestly, them exhibits at the MET didn't meet my expectations
But the Brooklyn art collection gave me some inspiration
See, this is what I saw when I stepped off La Guardia
Apollo Theatre where the crowd there will slaughter ya
Where big dreams live, the birth place of stardom
Listen close, you can still hear Malcolm X in Harlem...
[Malcolm X: "They only way you get justice is in the streets"]
Meanwhile, my brothers’ locked up for a robbery
The more I try to change, the more my people is watching me
‘Mugs want to clap me, pretend like they’re applauding me
But I don’t trust nobody ‘cause envy’s a hot commodity
Luck is opportunity, mixed with preparation but where does opportunity exist where I’m from?

From Chicago to New York, Cities with bright lights,
Overpopulated gentrification I might write
About the plight of its inhabitants too many things are similar
Visions painful as enemas, can’t tell the cops from the criminals
And everywhere I look, all these messages that’s subliminal
Was so surprised when bombarded by advertisements
It’s Billboards on every corner (corner in Times Square)
{Thought: “So no wonder lately I been craving Sean John gear”}
And most the models are light, light-skinned with long hair
In a city so diverse, something is wrong there…
On the corner teenager’s timid worried ‘bout self-image
But Malcolm X said you’re beautiful on the corner of Lennox
Left Harlem then took the train to China-Town
To buy my momma a purse was astonished when I found
Police raided the scene; I thought they would shut it down
But instead they took a bribe and happily left the town
And counterfeiting trademark infringers got back to business
This corruption I witnessed led me to the decision
It’s important to travel ‘round this country and pay attention
To the world that we live in and see that there’s little difference
Between the hearts of men in all the places I’ve seen
But it’s hope from Manhattan and from the Bronx to Queens
Where it seems it’s a culmination of races relatin’
Something we can take a tip from New York and bring to the Midwest corners
To St. Louis corners, from the Bronx to Manhattan to Cabrini Green corners, From Bed Stuy corners…
Posted by H. Rambsy at 7:40 PM