The Journey of Margaret Walker's "For My People" 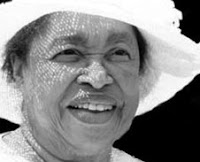 A brief publishing history of one of the most widely anthologized African American poems.

Walker's "For My People" was later included in Sterling Brown's anthology The Negro Caravan (1941).

Later, after having her poetry manuscript rejected a number of times, Walker won the Yale Series of Younger Poets award, and her poems were published under the title For My People (1942). The volume, which of course included the poem "For My People," received wide praise from reviewers.

Robert Kerlin mentioned and included an excerpt from Walker's poem in a late 1940s edition of his anthology Negro Poets and Their Poems.

In 1954, the Smithsonian released an album Anthology of Negro Poetry that  Langston Hughes, Claude McKay, Gwendolyn Brooks, Sterling Brown, Countee Cullen, and Margaret Walker reading their poems. Walker provided a reading of "For My People."

From the late 1940s up until the mid 1960s relatively few anthologies featuring African American poetry appeared. But something special happened in publishing history beginning in the late 1960s.

More than sixty anthologies were published between 1965 and 1976, during a period often referred to as the black arts movement. The movement gave rise to "new black poetry," as it was called, but the publication of so many anthologies also brought large numbers of historically significant poets' works back into print, including Margaret Walker's poems.

Of all the works regularly reprinted in anthologies, Walker's "For My People" was one of the most anthologized poems. Between 1967 and 1974, Walker's poem appeared in more than 20 collections.

In 1975, the Smithsonian released an album The Poetry of Margaret Walker, which included Walker, some years older now, reading several of her poems, including "For My People."

From the 1980s onward, Walker's poem is regularly included in anthologies.  In 1998, the year that Walker died, the California Newsreel released a documentary, For My People: The Life and Writing of Margaret Walker.

"For My People" is included in such anthologies as The Norton Anthology of African American Literature (1997, 2003) and The Anthology of Modern American Poetry (2000).

Recordings of Walker reading her poem appear on Our Souls Have Grown Deep Like the Rivers (2000) and Every Tone a Testament: An African American Aural History (2001).

Black people have regularly read, recited, and performed Walker's poem at church programs and community cultural events. Leah Ward Sears, a former Chief Justice of the Supreme Court in Georgia, for instance, read Walker's poem for a Favorite Poem Project in 1999. Sears's reading of "For My People" was posted on youtube in 2008.